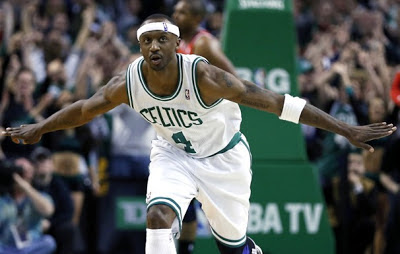 The Celtics set a franchise record with its 11th overtime game of the season and knocked off the Hawks, tying Atlanta's record for the sixth seed in the Eastern Conference.

After losing a 12-point lead in the final six minutes of the game, Jason Terry and Paul Pierce out shot the Hawks in overtime. Both scored five points in the extra period.


Pierce led the Celtics with a team high 27 points to go with his seven rebounds and assists. Terry scored 19 points, including a go ahead three pointer with 35 seconds left that broke a 102-102 tie.


"Jason really stepped up. We count on him late in games," Pierce said."Even if he doesn't get the shot, he's such a threat late in games that you can't come off of him. He's hit so many big shots throughout his career. He understand the moment and that's why he's here."

Terry also did a great job guarding Hawks' shooter Kyle Korver. Korver scored his only points of the night when he sunk a three pointer late in the fourth quarter. 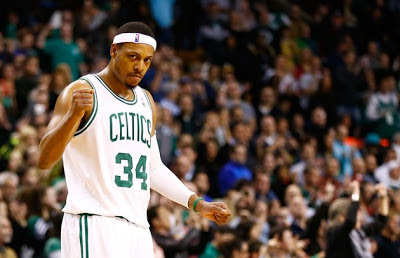 Josh Smith scored a game-high 32 points but turn the ball over twice in the final minute of overtime. Jeff Teague added 26 points to go with his nine assists for the Hawks.

Although the Hawks outscored the Celtics in the paint, 48-32, the Hawks struggled to defend the perimeter in overtime. Jeff Green, Pierce and Terry all scored from behind the arc in the last five minutes of the game.

Hawks came back from a 12-point deficit by setting back door picks for Smith and Al Horford for layups in the fourth quarter. Kevin Garnett readjusted defensively and stopped the Hawks from getting layups in overtime.


"We're working hard, we're grinding. We're showing our character," Garnett said."Our coaches are grinding themselves, and this team is just that. We're not looking for any handouts or sympathies or anything like that. We don't expect anyone to give us nothing. We're going out, working hard and earning everything we're getting."

Celtics will head down to Oklahoma City and play the Thunder Sunday afternoon. It will not be an easy task for the Celtics, Oklahoma City has won seven of their last eight games.

Pierce averaged 21 points, 5.5 assists and 8.5 rebounds this past week against the Warriors, 76ers, Pacers and the Hawks. He continues to be consistent and is hitting the big shots at the end of games. Players like Jeff Green, Terry and Bradley have only made his life a lot easier becuse their contributions... Celtics will need players to continue to step up if they want to beat one of the best teams in the NBA on Sunday.


Josue Pavon
twitter:
Posted by Josue Pavon at 6:05 AM