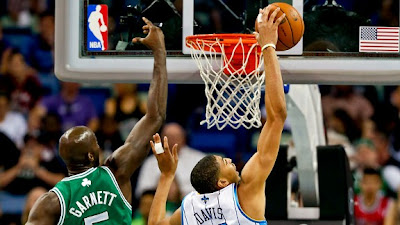 The New Orleans Hornets won their second and last game of the season against the Celtics, sweeping the season series for the first time in over five years.

Paul Pierce scored 11 fourth quarter points in a 15-3 Celtics run. Unfortunately, the Hornets were only down by five points with two minutes remaining and responded with a run of its own in one of the worse losses of the season for Boston.

After an Eric Gordon jumper, Pierce fouled Ryan Anderson while shooting a three pointer. Anderson made two of three from the line, cutting the lead down to one.

Hornets had another chance to take the lead after Pierce missed a jumper that would of gave the Celtics a three-point lead. Gordon missed a layup attempt, which set up a game winning put back from Anthony Davis to win the game for the Hornets. Kevin Garnett missed the box out assignment on Davis.


"It's tough man, it was my block out," Garnett said."I went to try to help Avery. In that sense, when you're trying to help a teammate, you're reacting. I'm acting off impulse as a big man to try to block shots and protect the basket and [Davis] too advantage of that."

Pierce scored 28, Garnett 20 to go with his six rebounds in his first game back after missing two games in one week. 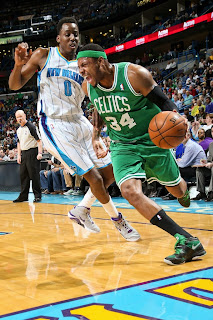 Although Jeff Green contributed off the bench with 13 points, he scored all of them in the first and went cold in the second half. Coach Rivers turned to Jordan Crawford for a spark, but Crawford couldn't get it going. He shot 2-for-5, and scored only four points in 22 minutes of play. Jason Terry went scoreless along with Chris Wilcox.

Crawford and Green were the only bench scorers for the Celtics

Celtics head to Texas next for their matchup against the Mavericks, Friday. It will be the first of a back-to-back that will conclude in Memphis against the Grizzles.

Hornets also dominated the Celtics in the rebounding department, 45-28. Although it will take time for D.J. White to break into the rotation, Doc may want to do it sooner than later. Celtics are giving up a lot more second chance opportunities and can't rely on Garnett, Bass and Wilcox. They need at least one other big man on the floor to help rebound like they've had in the past couple of years (Ryan Hollins & Mikki Moore)... With a back-to-back looming ahead against Dallas and Memphis, there is a good chance the Celtics could be swept in this mini road trip. This is the game that was supposed to be the easy one out of the three, it's too bad the Celtics let this game slip through its fingers.