Kenyon Martin says he was close to being a Celtic 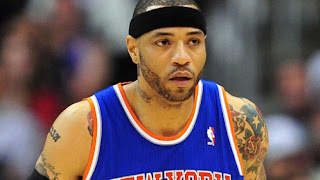 Celtics have been thin in the frontcourt and it has gotten worse recently due with the loss of Kevin Garnett, but things could have been different.

Boston nearly added depth to their frontcourt two months ago. Kenyon Martin told ESPN Boston's Jackie MacMullan that the Celtics nearly signed him back in January.


Martin, who was unsigned throughout the 2012-13 NBA season, signed with the Knicks in late-Feburary. Martin is averaging 8.3 points and 5.3 rebounds a game for the Knicks. He's averaging 14.3 points and 6.5 rebounds in his last four games.


"It was really close,"Martin told MacMullan."Like the deal was almost done. From what I understood, Doc wanted me and the players wanted me, but in the 11th hour they didn't pull the trigger." [ESPNBoston.com]

It's unfortunate the Celtics didn't sign the veteran. It's clear that Doc Rivers doesn't trust D.J. White and Shavlik Randolph due to their lack of extended playing time. Maybe Danny Ainge didn't think Martin would fit in with the team but if the players thought he was a good fit, one would think that would be a good enough reason to bring him aboard.


"There were talks, there was negotiations, they chose not to do it," Martin said."It was out of my control. I'm a Knick now, so they lost. I'm just here to prove that I never lost it. I guess I'm a better person than I am a basketball player." [Boston Herald]

No one knew that the Celtics would be without Garnett but the Celtics' frontcourt woes were showing  well before Garnett went down.

Rivers will ultimately have to fit White or Randolph into the rotation sooner than later. Celtics' small-ball rotation nearly loss to the Cavs Wednesday night, they might not be so lucky next time around.