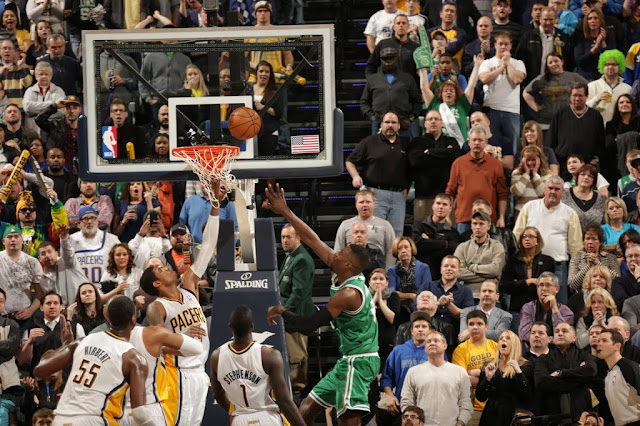 Kevin Garnett had 18 points and 10 rebounds last night, but in the two biggest plays in the game, it was his only two assists of the night that made the difference, capping of an 11-0 run and a 83-81 victory over the Indiana Pacers last night.

The Celtics were down two and and ran a pick and roll with KG and Pierce at the top of the key. Pierce dished to Kevin at his favorite spot to shoot at the free throw line but instead of shooting the patented  jump shot he found a cutting Avery Bradley for an easy layup to tie the game.

On the next possession with the game tied, it was more of the same with Garnett running the offense  and all the defensive attention on Pierce, Garnett patiently waited for Jeff Green to get free off a Pierce  screen and lofted a perfect pass to Green who layed it up with .05 seconds left in the game. 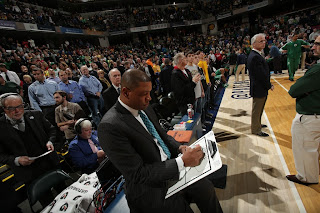 "Happy it went in. Great pass by Garnett. Great execution by us. Good draw up by Doc," Jeff Green said after the game.

There has to be a lot of credit given to Garnett, Pierce, and Green for the execution for the final play, but also Doc Rivers' ability to draw up the right play was on display in the closing seconds again last night.

It wasn't all pretty though for the Celtics last night. The Pacers were dominating the C's for the first 3 quarters. Indiana had a 14 point lead in the 3rd but it was a resilient and season defining comeback for the Celtics.

Other than Garnett the rest of the Celtics truly struggled on the offensive end but did notch five players in double digits. Garnett (18), Pierce (13), Bradley (13), Green (11), and Jason Terry (10) were the leading scorers for the Celtics.

The Cetlics' half court defense was championship caliber all game. They were beat in transition a few to many times but they held the Pacers to only 36% shooting on the night and forced 14 turnovers. 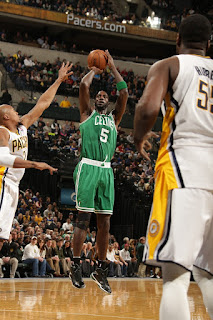 Going into this game, many were using this game as a measuring stick for the Celtics to see how they matched up to a true contender in the East. The question was answered, the Celtics are for real and the other than the Heat they are the team to be feared the most in the East come playoff time.

NOTES:
Early on the Celtics had no answer for Roy Hibbert, who looked absolutely dominant for the first 8 minutes of the game. Hibbert had 7pts and 8 boards in the opening couple of minutes. However, the rest of the game the Celtics were able to contain the big man and he only finished with 12 pts and 12 rebs.

Posted by SeanDutra at 7:39 AM