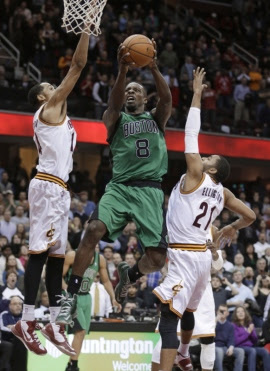 For the second time this season the Celtics topped an eight-point comeback in three minutes with a game-winning field goal by Jeff Green.

Just as Green beat the Indiana Pacers on March 6, coach Doc Rivers appointed Green over Paul Pierce to take the last shot, but this time with only two seconds left in the game. The pass was inbounded to Green as he pressed off of two screens and drove to the hoop. Celtics snapped a five-game losing streak.

"It should give him tremendous confidence,"Pierce said. "After that he should be in the huddle late in games saying, 'I want the ball.' I felt that way when I hit the first couple (of game winners). Antoine (Walker) was knocking down buzzer-beaters, other guys were there, and when I hit my first one I was like, 'I want the ball more.' If you're confident in your situation, you believe you can get the job done." [Boston Herald]


Green had 21 points and seven rebounds, Pierce scored 19 points, grabbed ten rebounds and was two assists shy of a triple-double.

The Cavs had six players who scored in double figures. Wayne Ellington led with 16.

Green not only proved that he can make the big plays when the game is on the line, but he demonstrated to coach Rivers that he is not afraid to do it.


"Jeff wanted the ball,"Rivers said."He asked for it by the way he was looking at me in the huddle. He clearly wanted the basketball. I sensed that and everybody sensed that." [Boston Globe] 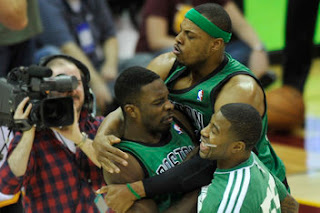 Pierce isn't the only player who can hit game-winners for the Celtics. Green's quickness and athletic abilities gives Doc another option at the end of games when the veterans are tired.

Celtics outscored the Cavs in the paint, 40-38 thanks to Brandon Bass. He scored a season-high 22 points and grabbed five rebounds.

Although the Celtics are struggling defensively without Kevin Garnett, they squeezed out a much needed win. Hopefully this is the inspiring game that they needed.

The Garnett-less Celtics play again Friday night when they host the Atlanta Hawks.

The third quarter continues to be the toughest 12 minutes of basketball for the Celtics. If Celtics don't have control after those twelve minutes, it's usually going to be a loss or a nail-biter. It's how they lost to the Heat weeks ago, things fell apart in the third quarter. Luckily in this case it was a nail-biter that ended up being a win. The Celtics need to stay focus throughout those twelve minutes... Jeff Green's confidence is sky high right now and with less than three weeks left in the season, it is good timing.
Posted by Josue Pavon at 1:09 PM