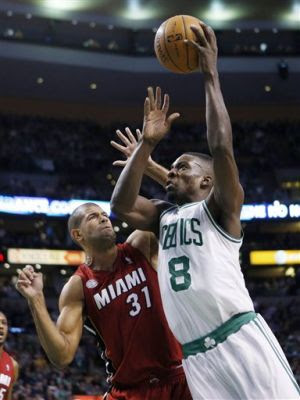 The Heat got their 23rd straight win last night against the Celtics in a rare win for Miami at TD Garden 105-103, but the Celtics gained much more after the game, confidence.

Yes, they lost the actual game but they proved that the they can indeed compete with the Heat, and at this point have to be viewed as the number on contender to knock the Heat off the throne of the East.

Oh yeah, and they did this all without their most important 'active' player, Kevin Garnett.

Jeff Green got the start in place of the injured KG, and took full advantage by putting on a masterful performance, probably the greatest game out of anybody in a Celtics uniform this season.
Green began the night by scoring 21 point in the first 9 minutes of the game and was key to the Celtics getting out in front of the Heat early.

He would finish the game with 43 points, the most put up by a Celtic all year and the first player other than Paul Pierce to score 40 points since Antoine Walker. Truly, this was the breakout game the Celtics were looking for from their up and coming forward since his return from heart surgery.  Unfortunately, it was not enough to edge the streaking Miami Heat . 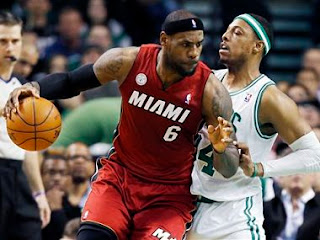 The Celtics got out to a big 17 point lead by the middle of the second quarter only to see the Heat go on a 15 to 6 run to end the second half and get within three. It was the same thing at the end of the game too.

The Celtics were up seven with five minutes left and Lebron James took over the game. He capped off a 15 to 4 run with a 21 foot contested jumper with 10 seconds left in the game to seal the deal for the Heat.

Overall, the Celtics lost but if they had a healthy KG in the lineup it would have been a completely different night. It could have been a repeat of the first game the Celtics played with out Rondo on that Sunday back in February where they were outlasted in the double overtime game by the Celtics.

Lebron was getting to the rim at ease without the threat of KG there to meet him. It was a huge hole for the Celtics but it was also great to have others step up,  especially Green. 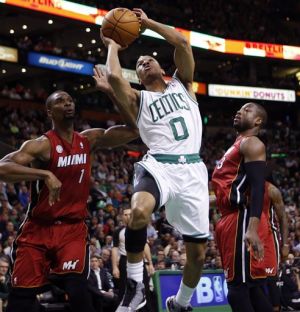 It wasn't just offensively that Green produced but he switched on James on multiple occasions, a task usually assigned for Paul Pierce the entire game. This definitely helped Pierce conserve energy, even though he played 40 minutes he was not spent on the offensive end and produced in his newly defined facilitator role. Pierce put up 17-8-8, and was just off on a potential game winning three point attempt with seconds remaining.

Lebron and his Heat are rolling right now, but come postseason time if the matchup should fall into place, the Celtics have ensured us all two things. They can compete with the Heat, and it is going to be one hell-of-a seven game series.

Posted by SeanDutra at 2:16 PM