Trade Rumors: Pierce for Josh Smith and Garnett to Clippers? 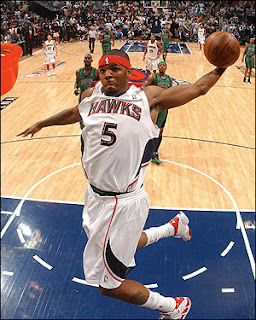 The Celtics have repeatedly been reported as having interest for Josh Smith. But according to Marc Stein of ESPN, Celtics will not be able to acquire Smith without involving Paul Pierce.

It was initially reported that president of basketball operations Danny Ainge offered Brandon Bass and Jeff Green to the Hawks for Smith over All-Star weekend, according to Gary Woelfel of the Racine Journal Times and other sources.

If the Celtics somehow swing a deal for Smith and trade away Bass and Green, my guess is that there will have to be another team involved. It's hard to believe that the Celtics would trade away their icon star Paul Pierce for Josh Smith, unless Ainge is willing to blow this team up and trade away Garnett in a separate deal.


Garnett, who has also been linked to talks as well, must waive his no-trade clause in order for him to be dealt. Before All-Star weekend, his name was mentioned in a potential deal to the Clippers for guard Eric Bledsoe and center DeAndre Jordan. But Garnett's close friend, clippers guard Chauncey Billups has stated that Garnett is adamant about not waiving his no-trade clause and wants to stay in Boston.

On Saturday, Garnett was asked if he would waive his no-trade clause and this is how he responded:

The only way I see Garnett accepting a trade is if the Celtics trade away Pierce first.

If the Celtics can trade away Bass and Green for Josh Smith, it would be worth giving serious consideration. Smith is a double-double machine who is athletic and can get big stops for you, especially alongside Garnett.

Danny has a lot of thinking to do before Thursday's 3:00 pm trading deadline.
Posted by Josue Pavon at 12:46 PM
Email ThisBlogThis!Share to TwitterShare to FacebookShare to Pinterest