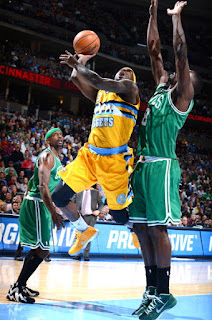 Lawson danced his way around the Celtics defense with ease. Lawson and Gallinari both scored 26 points and shot a combined 16-21 from the field. Lawson has averaged 27.5 points in his last four games.

Paul Pierce's offense struggled tremendously. He was two for 14 and scored 10 points. Jeff Green kept his team close throughout the second half, scoring 14 of his 20 points. His last bucket came with 1:30 left in the fourth, which was followed by a pair of made free throws from Terry that cut the Nuggets lead to four. Celtics didn't score a single point after Terry's free throws.


"Tonight, we just didn't close out any quarter very well," coach Rivers said. "End of the first, end of the half, the end of the third killed us. They went on their little run to end the game"

When Pierce isn't scoring, it's going to be the role players that need to step up. It would have been great to see Jason Terry score in double digits, but he came up short. Brandon Bass tried to contribute, he took seven shot but only made three of them.

The Nuggets were simply the better team last night in Denver. Celtics looked too eager at times and committed a lot of fouls, especially in the fourth quarter. When it came down to the wire, Boston didn't rotate the ball and look for the best shot.

Celtics continue their road trip in LA tonight when they take on the Lakers.

It's hard to measure the Celtics based off of this short-handed roster because this isn't the same team we're going to see after Thursday's trade deadline. Whether the Celtics make a trade (which is highly possible) or sign free agents, they will have a deeper bench for this road trip... Celtics missed a chance to sweep the season series against Denver for the first time since the 2003-04 season

Posted by Josue Pavon at 5:56 PM
Email ThisBlogThis!Share to TwitterShare to FacebookShare to Pinterest