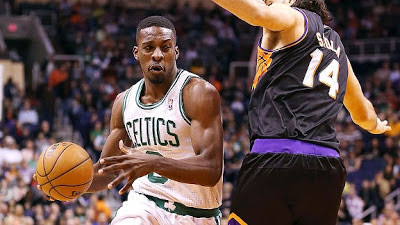 The great Dominic Torreto aka Vin Diesel once said, "It doesn't matter if you win by an inch or a mile, winning is winning."

That indeed was the case in Phoenix, as Boston, without Kevin Garnett, snapped a two-game losing streak by burning the Suns, 113-88.

Kevin Garnett was given the night off due to the tough upcoming schedule.

Boston finished with five players in double figures, but it was all about Jeff Green as he got his first start as a member of the Celtics and he didn't disappoint. Playing a season-high 38 minutes and leading all scorers with 31 points (also a season-high), Green shot 11-for-14 from the field. He also added seven rebounds, four assists and five blocks to top off his most complete game of the year.

Could this be the beginning of better things to come for young Jeff as maybe a permanent starter?

Paul Pierce enjoyed some rest as he sat out the fourth quarter after chipping in with eight points on 3-for-5 shooting, in 25 minutes. Boston led by as many as 30 points and shot 70 percent in the final 12 minutes. It was a complete team effort, especially with the production of the bench, they contributed with 47 points.

The Celtics started the game on a 13-0 run and never looked back. They were able to run and gun just like the "old Suns" did in the past, in the US Airways Center. Goran Dragic tried his best to stop the bleeding early, he finished with 19 points and 10 assists but turnovers were a factor as Celtics' defense was on point all night.


"It was a good win, a feel goof win for all the guys," Doc Rivers said. "The new guys played great. Jeff was phenomenal." 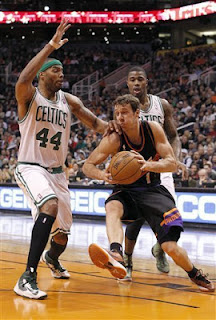 The Suns were down 53-41 at the half, then cut the lead to five with a 7-0 run in the first two minutes of the second half. Doc called a timeout and the C's pulled away for good by opening a 74-59 lead after a Terrence Williams lay-up with three minutes remaining in the frame. The short-handed Celtics finally won on the road against a western conference team for the first time this season.

Jordan Crawford, who was acquired on Thursday from the Washington Wizards made his Celtics debut. In 17 off the bench minutes, he scored 10 points on 4-for-7 shooting and hit a couple of threes to go with his three assists. It was also the play of Terrence Williams that had Doc impressed.


"We had Terrence for about two weeks in the beginning of the summer," Rivers said. "What always stood out to us the most, was his ability to make quick decisions with the basketball."

Williams finished with nine points, four assists and four rebounds in 24 minutes. The way I see it, that 10-day contract should be voided and turned into a full-time gig for the remainder of the season! Celtics heads to Portland to take on the Blazers, Sunday night. Tip-off is at 9:00 PM.


Notes:
Even though Phoenix has the worst record in the west at 18-37, Boston's defense won the battle on the glass, 45-40, while also forcing 13 turnovers and turning them into 20 Celtics points. Chris Wilcox in 21 minutes off the bench had 14 points on mostly dunks and grabbed eight rebounds. They are currently 1-2 on this five game west coast road trip, and have a 9-3 overall record since losing Rajon Rondo for the season.

Posted by Josue Pavon at 6:36 AM
Email ThisBlogThis!Share to TwitterShare to FacebookShare to Pinterest