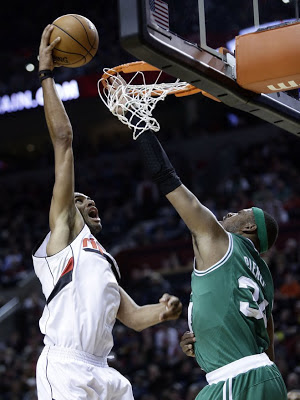 The Celtics went scoreless after tying the Blazers with less than two minutes left in the game and watched the Blazers close out a win on a 6-0 run.

Paul Pierce had a team-high 23 points along with his eight assists and seven rebounds. Kevin Garnett had 20 points and nine rebounds. The two did everything they could to keep the game close but missed crucial jump shots in the final minute.


"We didn't finish any quarter well," coach Rivers said. "They made some big shots."

It wasn't the first time coach Rivers expressed frustration about his team not closing out quarters well on this road trip. He expressed that same frustration at the beginning of the west coast trip, when the Nuggets outplayed the Celtics in Denver.

At the end of the fourth, Kevin Garnett's layup with 1:46 left, tied the game and gave the Celtics one more try to go ahead. Rookie Damian Lillard answered with a three-point play after Bradley got caught behind a screen, and gave the Blazers a three-point lead.


"When we needed stops, we couldn't get them, when we had a chance to turn the corner, we didn't turn it," Garnett said. "I thought we had opportunities to take advantage of it. Eight out of ten times we didn't do it. Small things, man. Small things." 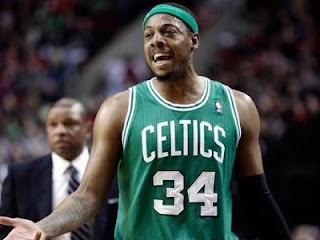 Celtics struggled to defend the perimeter and made costly mistakes on the defensive end. All-Star forward, LeMarcus Aldridge wasn't a thorn in the Celtics side like he's been in the past. Although his 16 points were effective, it wasn't Aldridge who came up big in the final minutes of the game.

Matthews hit a step back three-pointer to give the Blazers a six-point lead with 53 seconds left in the game.

Rivers has to do a better job in deciding which lineup is going to finish the fourth quarter on a game-to-game basis. Of course Celtics needed to counter Portland's run with offense but they also needed a better perimeter defender than Jason Terry. It was another disappointing performance offensively from Terry last night, his four points didn't help so why have him in at the end of the game?

Celtics could of benefited from Courtney Lee's defense, and it also would of been great to see Jeff Green get involved offensively in those final minutes (played in the last two minutes but didn't do much). If the Celtics continue to solely rely on Pierce and Garnett in close games at the end of the fourth quarter, it isn't always going to end well.

Celtics hope to finish their five-game road trip with a 2-3 record tonight in Utah.

Blazers were outscored in the paint, 36-32. Look for Garnett to score in the paint tonight against Utah because of his one-game rest in Phoenix... Jeff Green has to continue to take the ball to the hoop. He scored 11 points and but had only four free throw attempts... Celtics are now 9-4 without Rondo
Posted by Josue Pavon at 5:46 PM
Email ThisBlogThis!Share to TwitterShare to FacebookShare to Pinterest