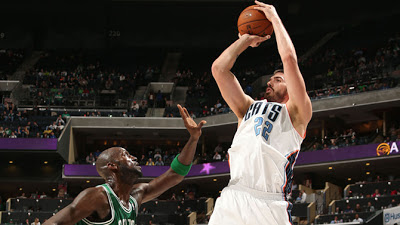 The tired Celtics lead the Bobcats for most of the game but ran out of gas in the final minutes.

Bobcats' Byron Mullens played the game of his career, scoring 25 points and grabbing 18 rebounds. It was only his fifth game back after missing 19 consecutive due to an ankle injury. Charlotte snapped its seven-game losing streak, and ended the Celtics winning streak.


It's clear the Celtics were fatigued. The triple-overtime game against Denver, followed by a late night flight to Charlotte for a 7:00 pm tip-off definitely took a lot out of them. 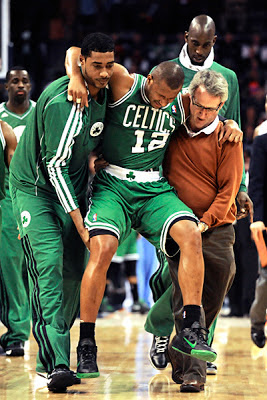 Not only did the Celtics have their seven-game winning streak snapped, but they lost yet another player to a season-ending injury.

In the third quarter, guard Leandro Barbosa suffered a left knee injury and had to be carried off the floor. An MRI Tuesday morning confirmed that Barbosa had torn his ACL and will miss the rest of the season. He is the third Celtic to suffer a season-ending injury (Rajon Rondo, Jared Sullinger) this year.

The Celtics went scoreless in the final two minutes of the game as the Bobcats scored seven straight points. Celtics had two chances to tie the game at the end of regulation but couldn't knock down a three.

Paul Pierce jacked one up, missed, but grabbed his own rebound and passed it out the Bradley, who missed the three-pointer to send it into overtime.

"We had a win streak going and we had momentum going," Courtney Lee said. "We wanted to finish out the rest of these games going into the (All-Star) break. So it's definitely a letdown. This one hurts more because we had the lead with one minute to go." 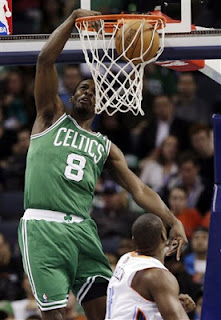 Jeff Green scored a team-high 18 points. He got most of his baskets by going to the hoop and went seven-for-seven from the free-throw line. Bobcats had no answer for Green but with nine minutes left to go, coach Rivers subbed Green out and went with Bass. Green wouldn't return to the floor until the final possession.


It's obvious Rivers wanted a big man in the paint to counter Mullens' rebounding, but it would have been a good idea to bring Green back into the game when the Celtics couldn't buy a basket and continued to settle for jump shots.

After Garnett scored back-to-back jumpers to give the Celtics a four-point lead, Bobcats ended the game with a three-pointer from Gerald Henderson, a jumper from Ramon Sessions and two free-throws from Kemba Walker (who was intentionally fouled).

Celtics will host the Chicago Bulls on Wednesday night. It will be the last game before the All-Star break.

Losing Barbosa is a tough blow. Throughout the seven-game winning streak he averaged 20 minutes a game and nine points per game throughout Rondo's absence... Even though Bradley missed the game winning three-pointer, it was great to see him take that shot. It won't be the last time Pierce will look to Bradley in a late-game situation. Bradley will most likey be open in those situations when Pierce is double teamed... Pierce almost averaged a triple double throughout the Celtics seven-game winning streak. The captain averaged 18.8 points, 10.1 rebounds, and 7.2 assists to go with two triple-doubles
Posted by Josue Pavon at 9:14 PM
Email ThisBlogThis!Share to TwitterShare to FacebookShare to Pinterest