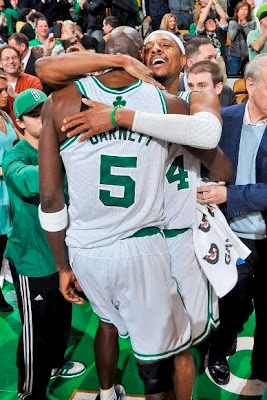 The two hottest teams in the NBA duked it out in triple-overtime Sunday night at TD Garden as the Celtics earned their seventh straight win in the game of the year.

Paul Pierce gave us one of his best performances of his career. In his second triple-double of the season, he scored 27 points, dished out 14 assists and grabbed 14 rebounds in 54 minutes. After Pierce missed his second free throw in double-overtime, Denver's Ty Lawson hit a jumper to give his team a three-point lead. Pierce hit a three-pointer to tie the game up at 107 and extended the game to triple-overtime.


"I mean that's what great players do. I would love to tell you I had something to do with it," Rivers said. "I was sitting just like the fans saying 'Please, Lord, Paul make a shot'"

Pierce hit a big one.

Celtics struggled to put up points in double-overtime but came back from a four-point deficit to send the game to triple-OT.

Kevin Garnett got his shot going in triple-overtime, scoring Celtics' first six points. He finished with 20 points and 18 rebounds.

With less than two minutes left in triple-overtime, Danilo Gallinari hit a three-pointer to tie the game at 113. Pierce dished out his 14th assist to Jason Terry who hit a huge three-pointer of his own to give the Celtics the lead. He had 26 points off the bench. 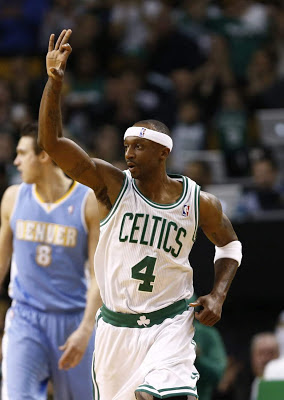 Nuggets had a chance to go ahead late in triple-overtime but it was sabotaged by Terry, who made a big steal which led to a win for the Celtics, and snapped a nine-game Nuggets winning streak.


"This was a great game to be a part of," Pierce said. "It was a great win against a quality ball club, not to say the other teams weren't quality teams we played, but you know, this is the type of win that can give us confidence to move forward."

Jeff Green played great off the bench. He hit a huge three-pointer in the first overtime to tie the game and sent the game to a second overtime. Green finished with 17 points.


"Lot of people still doubt us," Green said. "Can't come into games thinking we have to impress people."


Doc Rivers made a great decision in the first overtime. He rested KG. Although Garnett didn't agree with the decision, it was beneficial and gave Garnett a second wind. He was more aggressive defensively and was hitting shot after shot in the last overtime.

Celtics won't have much time to rest. They traveled down to Charlotte last night and will play the Bobcats tonight.

Unlike Denver, the Celtics did an excellent job taking care of ball by only committing 16 turnovers. The Nuggets committed 21 turnovers and had a few big ones in the overtime periods... Paul Pierce is the oldest player to finish a game with at least 20 points, 12 assists and 12 rebounds. It was an unbelievable performance. Maybe Pierce not going to All-Star weekend was for the better, he's dialed in... Jason Terry played his best game as a Celtic. After all the grief we give him for being a terrible defender, he makes the biggest defensive play of the game, which pretty much sealed the win. And after missing five straight three-point attempts, he hits a big one triple-overtime. Lets hope he keeps it up.
Posted by Josue Pavon at 11:26 AM
Email ThisBlogThis!Share to TwitterShare to FacebookShare to Pinterest