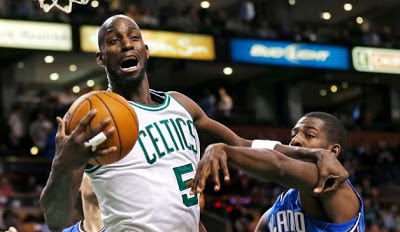 After learning that they would be without their rookie standout Jared Sullinger, the short-handed Celtics beat the Magic by getting every player involved.

Paul Pierce flirted with a triple-double for a second straight game. He had 14 points, 11 rebounds and seven assists. Garnett finished with 14 points and 10 rebounds.


"I'm capable of doing a little bit of everything," Pierce said. "Just trying to five the game what it needs. So regardless, if it's playing Rondo's role, [Jared Sullinger] role as rebounder, I'm going to try to fill the needs of what this ball club needs."

After losing their All-Star point guard Rajon Rondo at the beginning of the week to a torn ACL, Celtics learned Friday that their rookie Jared Sullinger will also be out for the season following back surgery. 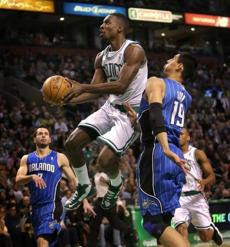 Courtney Lee played a well-rounded game as point guard. He scored 14 points, dished out five assists and grabbed down five rebounds. He was one of six players to score 12 or more points for the Celtics.


"I thought they responded the way they should," Rivers said. "Guys are out and it's not like it's a maybe, it's a sure thing and guys just understand other guys are going to get a shot."

Fortunately for the Celtics, the Magic were have also been dealing with injuries. Magic played without their top scorers in Glen Davis and Aaron Afflalo. To make matters worse for Orlando, their point guard Jameer Nelson injured his left forearm and never returned in the second half.


J.J. Redick led the way for the Magic with 15 points and five assists but couldn't put together a run with his teammates to stop the Celtics in the fourth quarter. The Celtics opened the fourth quarter shooting 7-for-9 and extended the lead, 86-63.

Celtics will certainly have their hands full when they host the L.A. Clippers this Sunday afternoon and will hope to extend their winning streak to four games.

Jared Sullinger's injury is another huge blow for the Celtics. His rebounding, especially offensively, is what helped jump start their fast break. In order for the Celtics to be successful without Rondo, it's uptempo play will be key... It may get ugly tomorrow against the Clippers if Chris Paul is active. They are the best fast breaking team and know how to defend it well. Clippers are also coming off a disappointing loss to Toronto Friday night and will look to beat the Celtics for the second and last time this season.
Posted by Josue Pavon at 5:47 PM
Email ThisBlogThis!Share to TwitterShare to FacebookShare to Pinterest