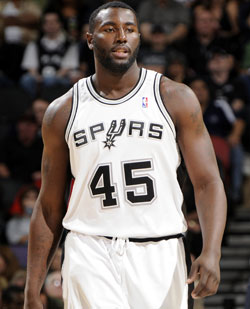 Broussard tweeted out Tuesday that San Antonio offered Blair to Toronto and Detroit but conversations eventually ended between the two clubs. He also mentioned that Miami and Portland have also expressed interest in the young forward.

Due to the loss of Jared Sullinger for the season, Celtics could use a tough big man like Blair. Last season, Blair was to San Antonio what Brandon Bass was to the Celtics. Unfortunately Bass has been a big disappointment this season. Wouldn't surprise me if Ainge is looking into Blair as a replacement for Bass because of their similar style of play.

Blair is a solid defender who can shoot a mid range jumper pretty well, and finish around the hoop, much like Bass did last season.

Blair hasn't seen much of the floor this season for the Spurs, he has been bumped down in the rotation because of how great forward/center Matt Bonner, Boris Diaw and center Tiago Splitter have all been playing this season.

Blair is averaging 5.2 points and 3.9 rebounds in 13.7 minutes per game.
Posted by Josue Pavon at 10:40 AM
Email ThisBlogThis!Share to TwitterShare to FacebookShare to Pinterest