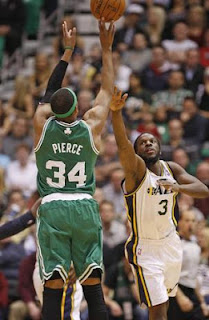 After a gruesome stretch of playing five games in seven days, Paul Pierce put his teammates on his back and carried them to victory last night in Salt Lake City.

Pierce scored seven straight points in the extra period, finishing with 26 points, seven rebounds and eight assists in one of his best performances of the season.


"It was huge," said Coach Rivers. "Whatever it was, it was the best win of the year for me. To go into overtime and still have enough to win."

After nearly hitting a game-winning shot as time expired, Pierce went on a 7-2 run of his own in overtime. Pierce hit a three-pointer to start off his run and tippy toed around the Jazz's defenders, scoring back-to-back jumpers.

The Celtics also got a big game from Avery Bradley, who scored a season-high 18 points to go with his five rebounds and four assists.

The Jazz trailed by eight going into the fourth but opened the quarter with a 13-2 run. Pierce broke a 95-95 tie in the last minute of regulation with a jump shot, which was quickly answered by Jazz's Alec Burke, setting up the final play for Pierce. 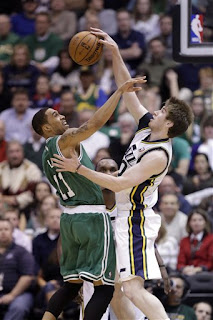 Gordon Hayward scored a team-high 26 points for the Jazz. Paul Millsap chipped in with 16 points and six rebounds.

Pierce and Kevin Garnett got the help they needed last night. Bradley's 18 points along with Jason Terry's 14 points (including four three-pointers), kept the game close. Garnett scored 13 points, including a big shot in overtime and grabbed 10 rebounds.

Overall, the game had 13 lead changes and was tied 17 times.

Celtics will get a well deserved rest this week. They return home to play the Golden State Warriors, Friday night at TD Garden.

In a postgame interview, Pierce said that this game against the Jazz was the game that stood out the most to him when he saw the west coast road trip schedule. After going back and fourth across time zones, the Celtics will look refreshed at home, having had four days off... Look for Jordan Crawford to play well in his first game at TD Garden as a Celtic. I expect him to play big minutes and will look a more comfortable with his new team, after practicing at home and having the necessary rest.
Posted by Josue Pavon at 12:52 PM
Email ThisBlogThis!Share to TwitterShare to FacebookShare to Pinterest
Labels: causeway street, celtics, game recap, jazz, nba, paul pierce, the truth