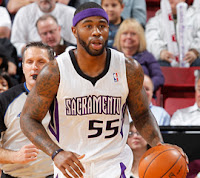 Celtics have made their first signing since losing Rajon Rondo, Jared Sullinger, and Leandro Barbosa by signing swingman Terrence Williams to a 10-day contract.

Williams, who has spent the current season playing basketball in China, joined the team Tuesday but will not be playing in tonight's game at Denver.

Williams was drafted 11th overall by New Jersey in 2009. In 129 NBA games, he also played with the Rockets, Kings and Pistons.

Coach Rivers told The Boston Globe that Williams worked out with the Celtics during the offseason and said, "He did a good job." Williams averaged 17.9 points, 3.4 rebounds and 4.1 assists playing for the Guangdong Southern Tigers of the Chinese Basketball Association.


Posted by Josue Pavon at 6:43 PM
Email ThisBlogThis!Share to TwitterShare to FacebookShare to Pinterest