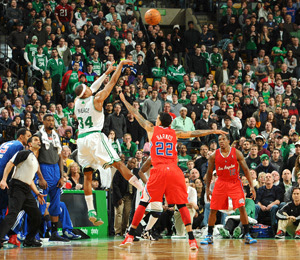 After the Clippers made its fourth quarter comeback at TD Garden on Sunday afternoon, Paul Pierce sent them home by doing what he has done time and time again; hitting a clutch jump shot.

Pierce's 3-point dagger put away the Clippers for good with three seconds left in the game. His final shot from behind the arc made it a two-possession game and sealed the win for the Celtics.


"We're playing in good spurts right now," Pierce said. "We got stagnant at times. We didn't defend at a high level in the second half. A win's a win, but we made it a lot more difficult than we thought it should have been."


Pierce finished the game with 22 points, five rebounds and two steals. Garnett was the only other starter who scored in double digits. He had 12 points.

The Celtics bench nearly outscored the starters in this one. The reserves combined for a whopping 52 points. Jeff Green and Leandro Barbosa led the way with 14 a piece and Jason Terry scored 13. Heck, Jason Collins nearly scored in double digits, he had seven.

"We won the game, we beat a heck of a team, and I'm happy with that," Rivers said. "But in my mind we can be better, much better, than we are today." 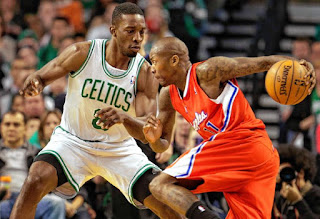 Eric Bledsoe, who was starting in place of injured Chris Paul, flirted with a triple double against the Celtics. His 23 points, 10 assists, and seven rebounds helped the Clippers make a fourth quarter comeback.

Jamal Crawford, who also had 23 points, had a chance to tie the game in the closing minute but fell short. After the Clippers cut a 19-point second half deficit to two, Avery Bradley drew an offensive foul against Crawford with 26.6 seconds remaining in the game. After Pierce's dagger shot, Crawford hit a three and cut the loss from a five-point defeat to a two-point defeat.

"Balance in the formula for our success, you know we got to do it by committee," Terry said. "Obviously we got two of our key parts down, but again, spreading the wealth. We got to make sure everyone gets involved, everybody's into the game."


Although both teams shot 50 percent, the Celtics made big stops to weather the storm. It's no surprise that the Celtics gave up 19-point lead- that is something we're used to. But drawing late-game fouls, like Bradley did against Crawford, (or getting defensive stops) is how the Celtics have beaten elite teams this year.

Celtics will travel north of the border to Toronto Wednesday night, in its next game against the Raptors. It will be the first end of a back-to-back. Thursday night, Celtics host the Lakers at TD Garden.

You couldn't of asked for more from the bench. Yes, Clippers played without Chris Paul but this win is definitely still a confidence booster for the Celtics because the Clippers are still one of the best teams in the NBA. If the reserves can keep this up, this could be a huge month for the Celtics in the Eastern Conference... February will be a crucial month for the Celtics. It's important that they create some ground in the Eastern Conference Standings before heading into March (currently the 8th seed, one game behind the Bucks and two games behind the Hawks). After the All-Star break, the Celtics start their annual west coast swing stopping in Denver, Los Angeles (Lakers), Phoenix, Portland and Utah. Celtics have the ability to win at least three out of five against these clubs if everyone can contribute like they did against the Clippers. After these next two games against the Raptors and Lakers, Celtics play the Nuggets, Bobcats and Bulls, and that pretty much sums up the month of February. The Bulls will be the toughest opponent out of the group. I have to say the odds of the Celtics grabbing the seventh, or even the sixth seed in the East, is looking pretty good right now.


Josue Pavon
Posted by Josue Pavon at 1:06 PM
Email ThisBlogThis!Share to TwitterShare to FacebookShare to Pinterest