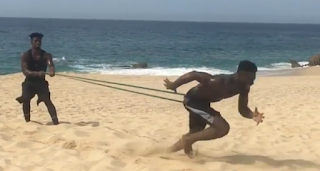 Celtics rookie Jaylen Brown is gearing up for his NBA debut by working out with one of the best shooting guards in the league.


Brown posted a video on Twitter of himself working out with Bulls All-Star Jimmy Butler over the weekend. The video shows the C's first-round pick running a leg drill with help from the Bulls guard.


Back in June, Butler complimented Brown during an appearance on Bill Simmons' podcast, stating the young prospect reminded him of himself after playing him one-on-one back in June.

Brown spoke to reporters in New York after the draft about the intense game he had with Butler.

"We went tooth and nail at it. ... I guess he thought it would be easy, and then somebody won the first game and he wanted to keep going," Brown told reporters in New York. "And so we kept going after that, then he won the second, then he won the third, then I won the fourth, and we ended up playing all the way to 21." [WEEI.com]

Butler -- who reportedly was targeted as a trade possibility by the Celtics this summer -- is getting ready for a highly anticipated season with the Bulls. After winning a gold medal with Team USA at the Rio Olympics, Butler will be teaming up with new teammates Dwyane Wade and former Celtic Rajon Rondo.