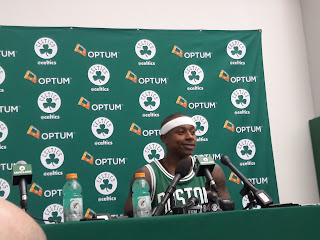 Isaiah Thomas has been in the NBA long enough to know just how important health and conditioning is during the offseason and told reporters at Celtics' Media Day on Monday how the changes he's made will make him a better player this year.

Entering his sixth season, Thomas sounded like a seasoned veteran in discussing the changes he's made in his eating habits, sleeping patter and wanting to extend his career to the age of 40.


"I changed my diet," Thomas said at Celtics' Media Day. "I hired a personal chef back home, and I'm eating vegetables for the first time since when my dad used to make me. I eliminated fast food. You guys have heard it before -- I want to play until I'm 40, and I know it starts with little things like that. Last week I got in contact with Dr.Z [Charles Czeisler] over there at Harvard, the 'Sleep Doctor.' I'm trying to learn how to sleep longer and sleep more. Not only am I going to eat healthier, I'm going to get a lot of sleep. Instead of watching TV and playing video games, I have to learn to get more sleep. That will help me be a better basketball player. Those are the little things I am trying to figure out. The older I get, the more I'm trying to figure those little things out to be a better basketball player. It's not all on the court."

Thomas also admitted that he's still bitter over last year's first-round playoff exit against the Hawks -- he explained how he's never given so much effort on the basketball court like he did in the playoffs, and that's using last season as motivation heading into the 2016-17 season.


"Whole off-season that's all I thought about," Thomas said. "Losing that series left a bad taste in all of our mouths. We want to get past that first round. I do, I know that. I want to go further. We have a good team, and people to make that happen. Last season hurt me especially because that's the first time I can say I gave everything I had -- I had no more left in me, and that's why I hurt so much. Having everybody back for another year, we're looking for bigger and better things. What that may be we don't know, but hopefully we can jell faster than we did last year with the additions we have on this team."

Despite being bounced out of the playoffs in back-to-back appearances, Thomas believes the Celtics are good enough to compete against the best teams in the league. And is confident his team can reach new heights this season.


"We're not that far away -- not a championship, we're not that close -- but we know we can compete with everyone in this league, whether it's Cleveland or Golden State," Thomas stated. "We know we're a special group. There's a lot of anticipation and expectations, but we're not worried about that. We're worried about things we can control. We have to be ourselves, whatever is your role do it at the highest possible level. We have a great group of guys."

Entering his third season with the Celtics, Thomas is very familiar with the city's passion for hard work and knows that one's effort can go a long way when you're playing for the C's.


"Once you put on that Celtics uniform you know people aren't satisfied with getting to the first round or whatever. They've seen greatness," Thomas explained. "They have all those championships for a reason. Once you come on this practice court or go play in the Garden, if you play every game like it's your last then people in this city and community are going to love you."