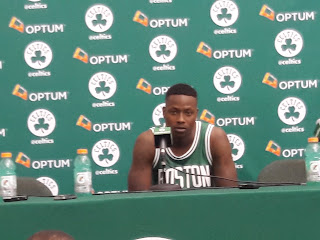 Terry Rozier appears to be ready for a larger role with the Celtics this season. The confident young point guard is coming into his own and his teammates have noticed the strides he's made throughout the offseason.


Rozier points to the playoff opportunity he received against the Hawks last year as a catalyst to his newfound confidence. He played five games, averaged 4.8 points, 3.4 rebounds and 1.2 assists in 19.8 minutes. It was the kind of experience Rozier -- as a rookie -- believes he needed.


"I feel that anytime a rookie can get on the floor and play in the playoffs, it feels like a boost going into the next season. So that definitely played a big factor," Rozier said at Monday's media day. "I'm just excited for next season.

One teammate who has noticed Rozier's great offseason is Marcus Smart. When he was asked about the team's vacant sixth man role, Smart mentioned Rozier as one of the lead reserves the Celtics have coming off their bench.


"With the absence of Evan, he's going to be missed here. The things he brought to the team, he created his own jump shot. He created for others," Smart said. "Everybody else understands the role that he left us and we have to step up as a team, I have to step up as an individual, but this team has to step up. And there's a lot of players. We've got guys coming off the bench like Terry Rozier, who's been real good in the offseason. And as you guys saw in the summer league, he's been playing his butt off."

Even Al Harford -- who has only played with Rozier for a month -- is impressed with the strides Rozier has made. In talking about the Celtics' young players, Horford singled out the second-year guard as one of his teammates who improved their game from last season.


"There's a lot of the younger guys who were very, very athletic," Horford told reporters Monday. "Guys that have definitely gotten better -- Jae Crowder came in and played with us one day and his 3-point shot has gotten better. That was good to see. I was encouraged by Terry as well. He's looked good all month. It just excited me to see that a lot of these guys are making progress in their game."