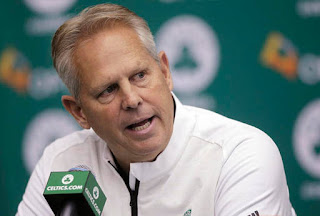 While answering questions surrounding the 2016-17 Celtics team, the president of basketball operations spoke about Kevin Garnett's retirement, Paul Pierce's announcement of his plans to retire at the end of next season and if the franchise plans on retiring both of their numbers.

In the morning before Celtics Media Day, Pierce made his announcement via The Players' Tribune that this will be the final season of his career.


"Well, first of all, I think Paul could play a few more years, but I'll believe it when I see it," the Celtics president of basketball operations said. "Paul loves the game. He loves basketball and I think that it's hard to see him walking away. I know there will come a time when he will. He's one of the great Celtics of all-time, he's a great competitor.

"The thing that stands out more to me than anything about Paul -- after the great shots and great plays and everything else he did here -- was just watching him, sitting right outside my office, seeing him come in at midnight and work on his game, work on his conditioning. He really loved the game and took it very seriously."

When asked about Garnett, Ainge nothing but the kindest words to say about the future hall-of-famer -- who he says is someone that had an enormous impact on the organization.


"I think I said in a statement that KG had as big as an impact as anybody that I've been around in an organization," Ainge said. "I think the thing that stands out the most to me about KG is just his team-first mentality. He never wanted it to be about KG. He never wanted his individual success to trump team success. He lived that in his day-to-day practice, and that's something that I'll remember about him."

Ainge didn't want to answer the question regarding the organization hanging numbers 34 and 5 in the rafters at TD Garden but instead suggested that the Celtics media should know the answer to that specific question.


"That's for future discussion," Ainge said. "I won't answer that yet because we haven't really discussed it internally. That's a decision that Wyc and Rich will ultimately make. You guys know the answers to those anyway. We'll just let the other people make those decisions, make those calls."