Brad Stevens is Not Setting Expectations for 2016-17 Season 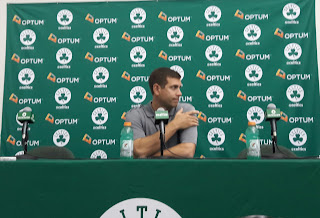 Brad Stevens isn't going to set any goals for his team this year, instead, he'll seek progress out of his players day-by-day in hopes of improving on last season's 48-34 2015-16 regular season record, and go from there.

Entering his fourth season, Stevens' only concern is getting the best out of his guys -- to him, the end result is merely a reflection.


"My expectations never change," Stevens said. "It's all about getting tomorrow and making sure we're as good as we can be. It's a very simple, boring process but it's the way that I go about it. And I think that the results take care of themselves."

It's a formula that so far, has been successful for the young coach -- who has increased his regular season win total every year since becoming the Celtics' head coach in 2013. Stevens has gone from 25 to 40 to 48 wins throughout his three-year coaching span and is now on pace to lead the franchise to its first 50-plus-win season since the 2010-11 campaign.


"Being better the next day. That's my perspective," Stevens stated. "The one thing I've been asked about -- last week I got asked about a number of wins goal, I got asked about a playoff goal or a playoff rounds goal or whatever the case may be -- right when you define something as success and you reach it, you don't go any further. You set the limit for your team.

"And I'm certainly not into setting ceilings. And I think that's why you focus on what you can do and try to put your best foot forward. And go into that next game, and if you do that you can win the game. And that's my job."

After being asked if he considered last season a success for the Celtics, Stevens replied:


"We got better. But I think there are things we can hopefully continue to improve. For me, it's about continuing what we're trying to improve."

Asked if he'll lean on point guards Isaiah Thomas and Marcus Smart to lead the offense, Stevens answered by saying it comes down to everyone on the roster and in order to reach success, it's going to the coaching staff and trickle down to every single player fulfilling their role.


"Everybody on our team has a job, and that job is to do their respective roles as well as they can and ultimately that they're an energy giver," Stevens explained. "That they come to work every day, that they embrace the idea of growth and we're all kinda having a catalytic effect on each other. So whether it's Isaiah, Marcus, Al, Demetrius Jackson, Jay Larranaga, down the line. That's all of our jobs, to add that little value toward helping each other achieve what we need to achieve.


"I think that coaches -- and I've seen this with Pop [Greg Popovich] said stuff I think they're really nice when asked," Stevens explained. "I haven't taught any of those guys anything. I think the reality is that I really enjoy being around high achievers, people that strive for continuous growth and are always challenged to meet the next challenge. And I think that whether it's in coaching or whether it's in business or higher education, whatever the case may be, those type of people inspire me. So I will eat up whatever they're telling me. And I certainly appreciate Bill's willingness to open his doors to me and let me learn from him, as others, and I've gotten a chance to be better by being around."