Doc Rivers on Paul Pierce playing next season: 'He still may change his mind' 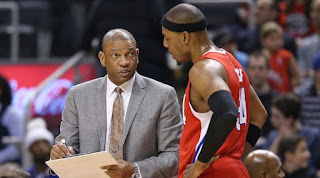 According to Clippers head coach Doc Rivers, Paul Pierce still hasn't decided if he's going to return for the 2016-17 NBA season, but if he decides to call it quits -- Rivers will make sure he retires a Celtic.


Rivers spoke to reporters at his annual ABCD Hoop Dream fundraiser at TD Garden on Tuesday about Pierce's future and says he's confident that if or when Pierce ultimately hangs em for good, he will do so as a member of the Celtics.

Pierce, who had career-lows in nearly every statistical category last year -- averaged 6.1 points and 2.7 rebounds in 18.1 minutes per game. Although there were reports out of LA indicating Pierce would return for a 19th season, he still hasn't given his coach a definitive answer about coming back.


"Depends on the day I talk to him," Rivers said as participants played half-court at the Garden. "Paul has had the summer, he goes back and forth. I think he has a right to do that, I really do. Paul didn't have the best year last year and I don't think he wants to go out that way, so that's why I think he's working to try to get back. He still may change his mind next week so we just have to wait. I told him if I see him at training camp, I'm assuming he's playing." [Boston Globe]

At 38, Pierce certainly isn't the player he was three years ago when Rivers coached him in Boston but has proven he can be effective in a diminished role. Averaging 14.6 points, 4.2 rebounds while shooting 52 percent from the floor, Pierce nearly pushed the Wizards to the Eastern Conference Finals in 2015.

He's had a tough time adjusting with the Clippers, but Rivers still believes Pierce can still compete.


"If I don't think [aging veterans] can play, I tell them that. I think Paul can play. I don't know how much he'll play but he can play." [Boston Globe]

After an abysmal season in Los Angeles, Pierce may want to write one final chapter before signing a one-day deal with Boston and retiring a Celtic.

Rivers has also spoken to another former Celtics this summer -- Ray Allen -- who is also looking to add to his legacy. After missing two seasons, Allen, 41, is hoping to make a comeback and Rivers is a believer -- saying Allen is in better shape than most players in the league.


"I won't talk about what we talked about but I think if Ray was in the right spot, he may play," Rivers said. "I think Ray wants to golf a lot too, right now. But Ray is in amazing shape. I mean I don't know how he does that as a player and I don't know how he does it as a non-player. He's probably in the top-five shape in the NBA right now. Can Ray play? Absolutely, he could." [Boston Globe]

While one former Celtic is gearing up for a comeback, there's another -- like Pierce -- who's uncertain if he wants to return next year. Kevin Garnett is still undecided on whether he wants to return for another season with the Timberwolves -- a young team that still has ways to go before becoming a contender but filled with loads of potential.

For the past two seasons, Garnett has thrived as a mentor in Minnesota -- pushing rising stars like Karl-Anthony Towns, Andrew Wiggins, Zach Lavine and rookie Kris Dunn.


"I think Kevin -- I know it because talked to him -- loves the young guys on his team. He loves how they work," Rivers said. "He thinks they have an old-school mentality. I think he's really bought into 'Kevin the Teacher' and I honestly never saw that coming either. Yet, he was a phenomenal teacher with us; I just didn't think he'd have the patience to do it. I think Kevin loves teaching these young guys and I think Paul just loves playing. He was the one that I thought would play the longest because of the way he plays, and he's doing it." [Boston Globe]