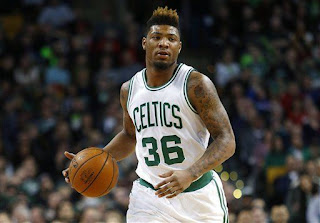 One of the biggest questions the Celtics will have to answer the start of the regular season will be; 'who will emerge as the team's sixth man?'

In a two-year span, Turner (now playing with the Trail Blazers) flourished as the Celtics' first option off the bench -- he provided scoring, rebounding and was the team's secondary ball handler. He averaged 10.5 points, 4.9 rebounds and 4.4 assists last season -- his production will be surely missed.

For a guy who finished fifth in voting for the NBA Sixth Man of the Year award and made game-deciding plays at the end of games, there's certainly a void left behind. However, the Celtics do have more than a few options off the bench -- guys who have the potential to perform on both ends of the floor at a high rate and are very much capable of becoming the team's newest sixth man next season.

Here are the best options:

Heading into his third NBA season, expectations are at an all-time high for Smart. Last year, he carved out a role for himself as the team's second-best back court defender (behind Avery Bradley), while also showing flashes of his scoring prowess. Most notably, a 26-point performance against arguably the best point guard in the league -- Russell Westbrook -- Smart made 9-of-14 from the floor, including 3-of-5 from behind the arc and led the C's to a 100-85 win at Oklahoma City.

An impressive showing for the young guard, but what's often frustrating about Smart's offense is his lack of consistency -- something Westbrook (who finished with 27 points that night) reminded us about Smart after the loss:

The following night, Smart finished with four points in 30 minutes against the Rockets -- a big drop off from what was the best scoring night of his career.

Although Smart's suffocating defense limited Westbrook to shoot only 25 percent (5-of-20), in order for him to slide into the team's sixth man role -- he's going to have to find consistency on both ends of the floor. If he can build off of Game 4 of last season's April playoff series against the Hawks -- another fantastic performance from Smart -- then there's a strong chance that Stevens will see his backup guard reach new heights next season.

Smart, who finished with 20 points, 8 rebounds, five assists and two steals against the Hawks -- delivered in the fourth quarter by scoring eight consecutive points (including back-to-back 3's), pulling down crucial rebounds and made critical defensive stops against the best player on the floor -- Paul Millsap -- towards the end of the fourth quarter and in overtime. The C's tied the series, 2-2, and Smart finished with a game-high plus-24 rating.

He also earned himself a few All-NBA Defensive Team votes and it's only a matter of time before we see Smart on one of the All-Defensive Teams in the near future. As an elite defender with an 8.4 point-career average, he's a lock in Stevens' rotation but if can shoot at a higher level, he'll undoubtedly become the Celtics' newest sixth man.

The ceiling is still very high for Smart and maybe this upcoming season ought to be the year we see him make humongous strides.

At 19, Brown was one of the youngest players selected in the 2016 NBA Draft and is already considered to be one of the most unpopular first round picks in recent Celtics history. With that in mind, Brown entered Summer League with a chip on his shoulder and proved to his naysayers how valuable he can be for the C's in his rookie season.

Brown -- who was projected to be drafted outside of top-5 by most draft experts, fared well this summer against the two draftees that were selected before him -- Ben Simmons and Brandon Ingram.

Brown displayed athleticism, quickness and the ability to initiate contact and get to the free-throw line. He scored 20-plus points in back-to-back games and go to the charity stripe 36 times in three games -- easily his most impressive stat of the summer. His ability to attack the hoop is certainly what he does best.

However, if he's going to become a vital piece for the Celtics next season, it's going to be his one-on-one defense that'll get him there. Brown finished with a combined seven steals in his last two games against the Cavaliers and Blazers -- he applies his quickness and great footwork on the defensive end by staying in front of his opponent and clogging the passing lanes.

Brown is not an effective shooter and is going to have to develop a jump shot. As Jae Crowder's back up, Brown is expected to be a nice spark off the bench and if he happens to develop a jumper to complement his speed and aggressive defense, it could be enough for him to become the sixth man for the C's.

As he heads towards his second NBA season, Rozier has every reason to feel good about himself. After playing meaningful minutes for Stevens in last April's playoff series against the Hawks, he followed that up by becoming the Celtics' best player this summer -- averaging a team-high 20 points, 5.3 rebounds and 3.5 assists.

Although NBA summer league stats don't always (almost never) translate the same in the regular season, Rozier's confidence definitely one thing he will carry into the 2016-17 season. He's a secondary facilitator -- a role that was very important for Turner and the Celtics last season. Rozier is also an above-average defender -- an attribute that will keep him on the floor.

He also proved he can score at the rim and has improved on his outside touch -- something the Celtics are always looking for. If Rozier is able to make the leap and put together an over-the-top performance in preseason, he'll have a shot at becoming Stevens' first option off the bench.

The Celtics' 2005 first round pick returns to Boston -- where his NBA journey began at 18 years old. The former dunk champion will look to rekindle his production of two years ago when he was able to put together the best season of his nine-year career.

As a journeyman, Green has played for six teams since the last time he played for Boston -- including stops with the Rockets, Mavericks, Pacers, Suns and the Heat.

As an NBA Sixth Man of the year candidate, Green shot a career-high 45 percent from the floor in 2014, including a 40 percent clip from deep. He eventually became a starter the following year before playing for the Heat last season -- where he only averaged eight points in 22.6 minutes a night. By the the start of the postseason, he was behind Justise Winslow and Josh Richardson in the depth chart and his playing time dipped to 9.2 minutes a night.

After finishing the 2015-16 season as one of the worst 3-point shooting teams in the league, the Celtics hope Green can recapture the outside touch he had in Phoenix. He's a 36.1 percent career shooter from behind the arc but is going to have his work cut out for himself in trying to top Smart, Rozier and Brown -- three candidates who are eager to become the team's newest sixth man throughout the 2016-17 season.