Teammates Praise Al Horford, who Believes the Celtics can Chase an NBA Title 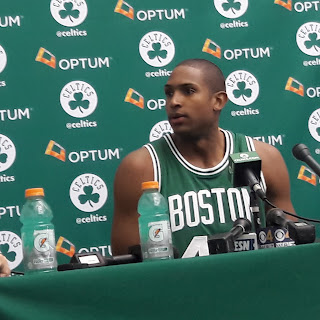 As the anticipation of Al Horford's Celtics debut builds, most of his newest teammates spent their time at the podium at Media Day on Monday praising the four-time All-Star.

There's little doubt that Horford won't be able to carve out a vital role in Boston. He's expected to provide scoring on one side of the floor and defense on the other while providing leadership for a young Celtics team. Horford -- who was a well-sought after free agent this summer -- says he was very impressed with the C's in last year's playoff series and believes joining the Celtics was his best option for his quest of winning an NBA title.

"There was a few reasons and one of them is even though I was in Atlanta last year and we beat the Celtics in the playoffs, I was really impressed with how hard the guys played and how good the team could be under coach Stevens," Horford explained. "Just from what I saw from the group -- it just really intrigued me. When the free agency process came around at the beginning, I would say I was very comfortable with Atlanta but as the time kept going on and I met with the Celtics it just became real to me.

Looking at my career at this point, I'm going into my 10th year and I want to be able to be a part of something special and win a championship. And with the type of guys that we have here, we have that possibility and that's something I wanted to be a part of."

Although the addition of Horford is expected to make the Celtics a significantly better team this season, he doesn't consider himself the solution to winning a championship. When he was asked if he thinks he's the missing piece the C's have been looking for, Horford answered, "I'm not sure about that, but I know that I'm gonna help our team be better. I'm gonna come in and gel as fast as I can and just make sure that we're playing at a high level, that we're working every day and we'll see what happens. It's a long season, but we need to start building good habits from Day 1."

Celtics president of basketball operations Danny Ainge is confident that Horford will bring a lot to the team -- traits of a veteran -- that will make him invaluable on and off the court.


"I love his experience, his character and his versatility," Ainge said about Horford. "Very talented player, but as much as anything, he's just been very consistent over his career. Shooting the ball, playing multiple positions and I think he's a guy that fits our system where we have the big guys handling the ball a lot."

The Horford praising was a constant theme throughout Media Day as All-Star point guard Isaiah Thomas weighed in on his newest All-Star teammate. When the topic of Horford's four-year, $113 million contract came up, Thomas raised his eyebrows and suggested, "If we go out for team dinners he can pay for everything, around Christmas time we're looking forward to really nice gifts," Thomas said jokingly before getting into what Horford will add to the Celtics this season.


"He's going to help us in so many ways," Thomas said. "These last couple of weeks I was able to work out with him and play five-on-five. He's so unselfish. He knows how to make the right play out of the pick-and-roll. He can help us in a lot of ways, not just offensively but defensively. He's someone we needed. I'm excited to be going with him. Hopefully we can jell sooner than later."

Another teammate -- Jae Crowder -- believes that Horford will bring a winner's mentality to the Celtics and says he remembers how effective the nine-year veteran can be from last year's first-round playoff series against the Hawks.


"It was a challenge in the playoffs, he's such a great player," Crowder said about Horford. "He knows exactly what to bring to the game of basketball, to a team, and it's not coincidence that wherever he goes, he wins. Since his college days on, he's been a winner. He brings leadership to us, he brings a winning mentality and I know for sure he's great at what he does -- and that's protect the rim and score at a high rate and rebound at a high rate."

Despite all the admiration and endorsing from his new team, Horford isn't nervous about having to perform at a high level but is aware of the city's rich history. Admitting that since his rookie season, the 17 Celtics championship banners at TD Garden is something that struck a cord with him.