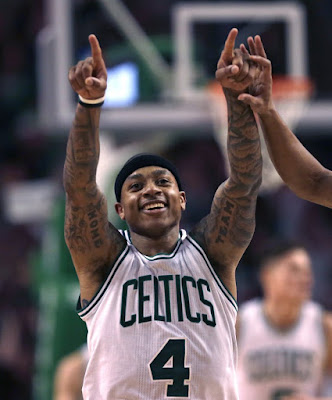 In hopes of changing their luck at the NBA Draft Lottery, the Celtics will send their All-star point guard Isaiah Thomas to the drawing.

Talks about the Celtics sending Thomas to the lottery surfaced shortly after the Celtics were eliminated from the first round of the playoffs. Celtics president of basketball operations Danny Ainge confirmed on Wednesday that Thomas will in fact represent his team at this year's lottery selection -- a collective decision made by him, Celtics co-owners Wyc Grousbeck, Steve Pagliuca and president Rich Gotham.


"Wyc and Rich and I collectively, and [co-owner Steve Pagliuca], we talked about it and thought it would be a great idea," Ainge said. "And Isaiah, when he was told, it was like his eyes lit up. He loves that stuff."

Can Thomas bring the Celtics some good luck?

In the past, the Celtics have sent one of their legends to the NBA Draft Lottery drawing -- like Bill Russell or Tom Heinsohn. This year, it's Thomas who will represent the Celtics in New York City on May 17.

Ainge, who was also asked about what he says to people who don't consider Thomas a "foundation" player for the Celtics, Ainge smiled and replied,


"Have they been to any games?"