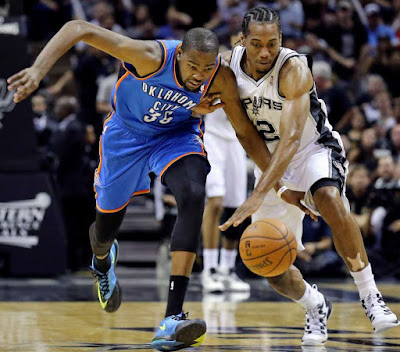 Dreams of Kevin Durant in a Celtics uniform have turned Celtics fans into Gollum from Lord Of The Rings.  We now think that everything is a threat against our precious and every little thing that is happening with Durant is obstructing his potential off season decision.


Twitter, Facebook, and talking heads all over the internet are now sold that there is no way that Durant could ever leave OKC. Right now, Durant and the Thunder have a 3-2 lead against the Spurs after last night's epic Game 5 and all I have heard all day is that the Thunder are now a title contender! They've proven they can win in San Antonio! They are now the favorite in the Western Confernce! Kevin Durant is down with OKC 4 lyyyyyyfe!!!

Everyone needs to just calm down.

This series against the San Antonio Spurs will have zero bearing on Kevin Durant's decision to leave OKC this summer, even if the Thunder win.

If the Thunder beat the Spurs and advance to the Western Conference finals this year, does that mean the Spurs are suddenly going to disappear for the remainder of his time in OKC?  Just because Durant is hypothetically "killing the beast" by potentially beating the Spurs doesn't mean they actually die...

GUESS WHAT!?! THE SPURS ARE GOING TO BE JUST AS GOOD NEXT YEAR!

If Durant decides to move on from OKC and come to the Celtics it's because he looks across the league and notices that 3 of the top 4 teams in the NBA are in the West.

The Cavaliers are the most well rested team and are watching the Raptors and Heat battle it out for the reward of getting swept in the Eastern Conference Finals. On the other hand Durant is in a more than likely 7-game battle against the  San Antonio Spurs, who are only an NBA Dynasty over the past 10 years. Oh, and did I mention it's only the second round and that even if the Thunder knock out the all mighty Spurs, they need to go up against the greatest regular season team in the history of the NBA. If he stays with OKC he will literally have to deal with this for the rest of his career.

LeBron is literally laughing at him. 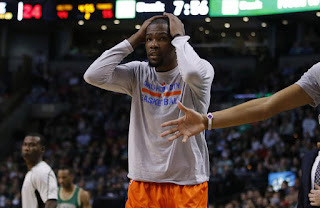 I'm sure a candid tweet from Lebron will come out soon baiting Durant to stay with his original team only because he doesn't want him coming out East.  Durant on the Celtics with another free agent or trade or whatever would be a better situation for Durant if he wants to contend every year.

Let's not kid ourselves into believing that if the Thunder beat the Spurs and move on to the WCF, that will be the nail in the coffin for the Celtics rumors. It's short sighted nonsense.

Now if you want to shoot down the rumor for other reasons go right ahead, but his success in one series is bologna.