Evan Turner on returning to Boston next season: 'I don't know' 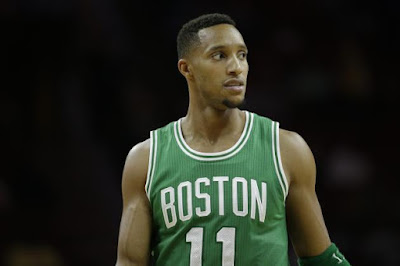 Evan Turner isn't afraid to admit that he's willing to test the free agent waters this summer, but hopes the process -- that starts on July 1 -- won't be a long one.

Turner talked about his pending future with the Celtics after Game 6's season-ending loss against the Hawks -- admitting that some of the free agency process will be out of his control and isn't sure if he'll be wearing a Celtics uniform next season.


"I really don't know," Turner said. "I would love to come back, but at the same time, a lot of things, a lot of variables that are going to occur and things like that that I can't control. Whenever July hits, we'll talk about it."

But one thing Turner does know is that he hopes his new contract will be signed on July 1.

But the Celtics will most likely need more than 24 hours after the start of free agency to decide on what kind of deal they want to offer Turner. With plenty of cap space and top-tier free agents like Kevin Durant, DeMar DeRozan and Al Horford waiting in the waters, Celtics president of basketball operations Danny Ainge will attempt to reel in a budding superstar before focusing on Turner.

Turner, a six-year veteran who played for the 76ers and Pacers before his two seasons with the Celtics, is hopeful he will stay in Boston -- a place he considers the best place to play.


"I love the city, obviously. It's the best place to play," Turner said. "You go out to a lot of places or organizations, but this is a true franchise. So to be able to play at the Garden and walk past Bill Russell and Tommy Heinsohn, things like that, it's been real. I definitely am glad to say I was able to play here, and hopefully I get more chances.

"I love playing for the Celtics. I love the city and everything. It's definitely been a blessing. Hopefully it's not my last game in a Celtics uniform. The coolest thing is to wear the uniform. I don't take that for granted. The tradition and opportunity and the energy around it is great."

For the past two seasons, Turner carved out a very effective off the bench role with the Celtics -- a role coach Brad Stevens certainly treasures.


"I can't imagine anybody being more valuable off the bench than Evan," Stevens said. "He's been extremely valuable. He guards three positions a night, sometimes four positions. Obviously we have him with the ball all the time. He's just had a great year and really impacted us in the last two years."

Although he knows his coach would love to see him back next season, Turner understands how crucial this summer will be for the Celtics -- a franchise that will look to cash in on their assets and improve their young talented roster.


"Coach [Stevens] definitely said [he wants me back]," said Turner. "He said he'll be pushing for me and everything like that. And that's pretty much it. But there's a lot of stuff that's going on right now. I understand it. And I understand what's going to occur, with the draft picks and the young stars trying to develop and trying to get a superstar, stuff like that. I definitely comprehend it."

In his two seasons with the Celtics, Turner averaged 10 points, 5 rebounds and 5 assists. He was voted sixth for the NBA's 6th Man of the year award and whether it's with the Celtics or not, is due for a big pay day this summer. He will most likely be inked to an annual salary worth upwards of $10 million.