Ainge has a lot of 'hope' heading into the offseason, 'Expectations are high' 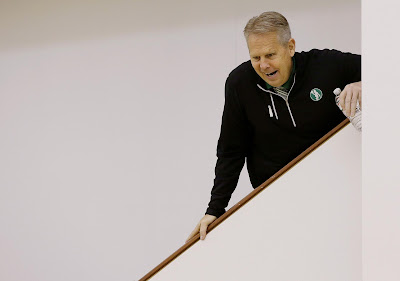 Celtics president of basketball operations Danny Ainge is ready to embark on one of the most important offseasons of his tenure.

Since the summer of 2013, Ainge has been in the process of rebuilding a franchise that raised its 17th championship banner in 2008 and was one win away from raising another in 2010. The Celtics have used three years to compile assets. This is the first time Ainge will head into the offseason equipped with cap space, a potential top-3 draft pick and expectations at an all-time high -- much higher than they were one year ago.


"This offseason is bigger," Ainge said. "My expectations are high this offseason, and yet I also know that it takes good fortune. We need the ping pong balls to bounce our way and give us the best opportunity. Whether we use that (lottery) pick or whether we trade that pick, and in free agency, we have opportunities. And that's all we have. We have no guarantees of great things happening. We just have a lot of hope."

With Brooklyn's first-round pick, the Celtics have a 46.9 percent chance of landing a top-3 pick and a 15.6 percent chance of selecting the No. 1 overall pick in this year's NBA draft. However, many speculate that if Ainge is able to land a high pick, he will package that selection in a deal for a budding superstar who will make his team a championship contender. He also has two more first-round picks and five second-round picks in this year's draft that he can work with.


"We have a lot of work ahead of us, and we have to plan A through Z," Ainge said. "Usually it's more A through G, but we have A through Z this year just to have an opportunity to upgrade our team."

There's a reason why these expectations are so high -- Ainge was able to move a No. 5 pick on draft night in 2007 for Ray Allen -- a move that helped convince superstar Kevin Garnett to waive his no-trade clause to join forces with then-Celtics star Paul Pierce and Allen.

With an estimated $89 million in cap space, Ainge is still unsure if he will be able to land a transcendent player this summer.


"I don't know. This is new territory for all of us," Ainge said. "We can all make our predictions but really, I'm not sure. Every team is in a unique situation and a different situation. We'll be making lots of calls, trying to make trades. Listen, the transcendent players, the good players that you all need to win and be successful in the NBA, they're very hard to find and there's not many of them. And there's 30 very qualified teams out there trying to find them all."

Ainge knows it isn't going to be easy to strike a deal with a team for a franchise-altering star and when it comes to free agency -- he acknowledged a substantial difference between the Celtics roster in May of 2007 compared to the roster currently intact -- one that may make things harder for him to bring in a top-tier free agent.

If the Celtics fail to deal their draft picks for an immediate impact player, the Celtics will have to turn to free agency -- where the odds are stacked against them. Like Ainge said, Boston may not be a desirable destination for a superstar player if there isn't a "Paul Pierce" on the roster.

However, Ainge will have to prepare to draft a player who could immediately help his team if he's unable to make a deal come draft night and was asked if such a player exists in this year's draft class.


"I don't know yet. We see guys that have been drafted in the thirties and forties that are transcendent players," Ainge said. "They're out there, and the possibility. That's what makes the draft so exciting is the hope and possibility of what could be but there's certainly no guarantee. I mean the chances of a player picked in the twenties is maybe a 10 percent chance of that player being a rotation player. So, the odds of using draft picks and those becoming [transcending] are very small. But they're still possible."

The first step will be left to fate, when the NBA Draft Lottery on May 17 decides the team's first-round pick.