Why Celtics should trade for 76ers C Nerlens Noel 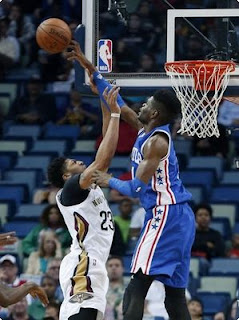 As Danny Ainge and co. head toward next month's NBA draft, there's a potential move available that the Celtics may want to explore.

In an interview with ESPN Sound Jersey 97.3, ESPN's Chad Ford said he believes there's a very good chance the 76ers will trade either Jahlil Okafor or Nerlens Noel.


"I think that there's a very high likelihood, that whether it's to move up in the draft or use them to grab a free agent in a sign and trade or just a trade, that you will not see the Nerlens Noel-Jahlil Okafor pairing at the start of next season," Chad Ford said. "I think that they'll gauge interest of both players. I think that there might be a slight preference for Noel, to keep him around with the Sixers, and I think you might be right, there might a slight, better value for Okafor out on the market, but I think everyone agrees that that combination of these two players doesn't necessarily work."

With the No. 1 pick, the Sixers have two forwards to choose from in Ben Simmons and Brandon Ingram, leaving them with room to add a guard. According to Ford, the 76ers would jump at a chance to acquire the Celtics' No. 3 pick, where they'd be able to add a rising start to their backcourt.


"If I was Philadelphia, it would be done tomorrow," Chad Ford said. "I don't know if Boston would do it, but for Philadelphia, 100 percent. That would allow them to actually I think bring in another guard, an elite guard, whether that's Kris Dunn or Jamal Murray, and suddenly now you've got a very, very bright future. I think that's an easy call for the Sixers if Boston would do it."

Out of the two studs, the Celtics should focus on pursing Noel.

The Everett native is a young rim protector -- the kind of big the Celtics lack -- who also can rebound and score around the rim. This past season Noel averaged 11.1 points, 8.1 rebounds and 1.5 blocks. Tied with the Warriors and Clippers, the Celtics finished fourth in the NBA in defensive rating. Adding a player like Noel into the fold would turn the C's into a defensive juggernaut without having to break the bank in trying to sign a free agent big man like Hassan Whiteside or Bismack Biyombo.

Compared to Okafor, the asking price for Noel isn't as steep, but of course he still will cost the Celtics their No. 3 pick in this year's draft. However, if the Celtics were to package their No. 3 pick along with second-round picks and a prospect like Terry Rozier or James Young, that could be enough for them to acquire Noel, whereas a proposed deal for Okafor most likely would have to include on of their rotation guys like Marcus Smart or Kelly Olynyk.

Out of the two, Okafor certainly is a better scorer, but in Brad Stevens' system, Noel would flourish. In a fast-break offense he can run the floor, set the pick-and-roll, and create second-chance opportunities for the Celtics on the glass.

At age 22, Noel still has plenty of room to grow and has the potential to become one of the best defending big men in the league. Sure, a move like this wouldn't turn the Celtics into an instant championship-contending team, but it's a great place to start.