Draft Lottery Recap - Where Do the Celtics Go From Here? 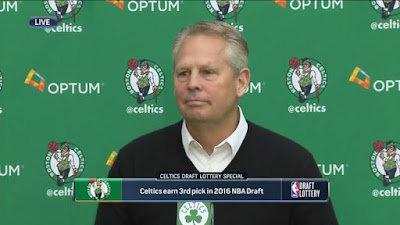 Winning the third pick in the 2016 NBA Draft was poetic justice for a Boston franchise who has rarely (if ever) been rewarded its rightful pick in the Draft Lottery age. The Celtics came into the night with a shot at landing anywhere from picks one through six and found themselves rewarded by the Brooklyn Nets hard work in landing exactly on the slot they should have. Now that they know the 'where' the question shifts to 'who?'

While everyone has their opinion on where to go with this pick, I took the time to outline a few ideas that may intrigue every green teamer to varying degrees. Here are a few names and scenarios that might be worth watching:

If Boston elects to stand pat in the first round  (Picks 3, 16, & 23) they will be picking eight players in the 2016 draft. I would assume Danny Ainge trims that number to four or five by dumping some of the second round picks (31, 35, 45, 51 & 58)  he has for cash considerations or a spare trade exception out there. With that in mind, here are a few names for Danny to consider in each spot:

If Boston elected to make a move, the obvious candidates are Jimmy Butler of the Bulls, Paul George of the Pacers, and DeMarcus Cousins of the Kings. As mentioned a few weeks ago, these are all going to be very tough moves to pull off because of the value of the players and the large market for this caliber of player. I have a few other smaller deals that could work with this pick while adding pieces to the current Celtics roster.

Not the sexiest deal going but it adds a young big man who has NBA experience to cover the loss of Tyler Zeller and the added bonus of allowing Boston to remain in the top four picks to select Hield or Murray if desired. You do lose another first rounder but at that point in the draft you’d be lucky to grab a big man like Len who can provide 10 points and 10 rebounds a night.

Again, not going to make anyone do cartwheels but allows the Celtics the leftovers of Murray, Hield, Dunn, or Bender as well as adding much needed depth to the frontcourt. Payne is a great athletic stretch forward who would fit well with the second unit and Pekovic (if healthy) is a strong starting center who can give a much needed physical presence to the Celtics frontcourt without needing a ton of shots to help.

Of the deals discussed, Hayward is the biggest name swapping hands. He may not be a household name but he would immediately add offense to Boston’s perimeter and adds a fantastic relationship with Celtics coach Brad Stevens to the locker room. The team would still be in need of some frontcourt help but the offense would be in terrific shape with Hayward’s 18 to 20 points a night added in.

In fairness, I don’t envy the amount of phone calls and meetings Danny Ainge will be making in the coming weeks leading up to the draft. Keeping the pick(s) means the Celtics will be hunting for players who can help this young team get over the first round hump and challenge LeBron James and the Cavaliers now, as well as stockpiling talent for a few years down the road. Trading the pick(s) will have Boston searching for players to add to a group that is in need of another star…God bless you Danny.

Click Here to listen to some in-depth discussion about the Celtics and NBA Draft on the latest episode of the Causeway Street Podcast!