Danny Ainge on Celtics offseason: 'We're trying to become a better team as fast as we can without selling out' 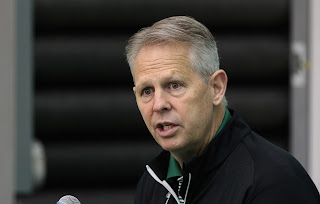 Heading into a potentially crucial summer, Celtics president of basketball operations Danny Ainge admitted that he will explore possible trades on Draft Night but will be careful in making sure he isn't the one overspending in any proposed deal.


Ainge joined WBZ-TV's Sports Final Sunday to discuss the NBA Draft and how important this offseason is going to be for the Celtics. Ainge, who is equipped with assets and cap space, understands the excitement of Celtics fans wanting to see their team make a vast improvement -- however, Ainge has his eyes set on the franchise's long-term plans rather than short-term.


"Right now, we're trying to become a better team as fast as we can without selling out. I guess that's the best way to put it," Ainge said. "We want to become a more significant team this upcoming year. And, at the same time, we want to build something that's sustainable for a longer period of time.

Ainge also talked about landing a pick outside of the top 2 and how the Celtics may have to package roster guys with the No. 3 draft pick in order to land an immediate impact player.


"[The pick] certainly doesn't have the same cachet in trade conversations, in trying to get better quick, so that sets that back a little bit. Or we'd have to give up more," Ainge stated. "I think that there are good players, if we end up using that draft pick. We're excited about the potential players."

However, if the Celtics end up keeping their No. 3 pick, it wouldn't be a disappointment.


"A player that is going to take time to develop or a player that may not come over to the NBA for a year or two, if we really believe that player's the best player, we have to take him," Ainge said. "We cannot let a player slip by us just because it doesn't fulfill our immediate satisfaction, or the objective for the fans to see something more exciting. We have to pick the best player, under any circumstance. There are just too many examples of really good players that the fans haven't been excited about on draft day.

"Last year, I remember Porzingis was drafted in New York and they were booing all over the place and you're like, 'Well, why would be booing Porzingis?' When you draft players, I remember when I was in Phoenix and we drafted Steve Nash and we were booed. I remember being booed when Dan Majerle was drafted in Phoenix. You can't base any of your decisions based on what the public thinks and based on what other people think you should do. You just have to use our experience, our work, and our eyes, and we communicate all the time on what the best road to go is."