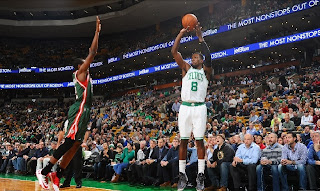 Boston - The Milwaukee Bucks came into Tuesday night's game with a 3-13 record. Two out of their three wins had come at the helm of the Celtics and both were comeback wins after being down by double digits. This time around, Jordan Crawford made sure the home team kept the lead as they beat the Bucks 108-100.
Crawford took over in the fourth quarter at the TD Garden as he scored 15 of his 25 points to help the Celtics hold off the visitors from Milwaukee;

"We've just got to learn how to stay focused and pull out these wins...grind them out," said Crawford, who was 5-for-5 in the fourth including three 3-pointers to end the game. "I think we're getting a little better. They still made a run and made it close." 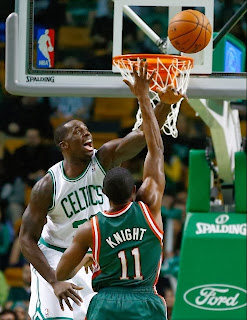 Boston was coming off a 92-85 loss to the Bucks on Saturday night in Milwaukee. Jeff Green added 18 points and Brandon Bass helped out the cause with 16 points and grabbing nine rebounds, while Avery Bradly and Jared Sullinger scored 15 and 12 respectfully, making all starters finishing in double figures.
Losing two of the last three games, Brad Stevens talked about how badly they wanted this one;

"We moved the ball side to side and inside-out better than we did on Saturday," said the Celtics' coach. "Maybe that's a little bit of karma for why the shots went in."

The Bucks had snapped an 11-game losing streak by beating the Celtics on Saturday, but could not rally from a 13-point deficit in the fourth quarter. O.J. Mayo scored 19, and Brandon Knight had 15 points and six assists for Milwaukee.
The win puts the Celtics at 8-12 for the season and for the time being, in first place in a not so impressive Atlantic Division, while Toronto suffered another loss to the Golden State Warriors, trail Boston by a half game. 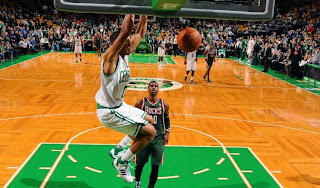 The C's lead by as much as 15 points and had a 13-point lead in the final period cut to three twice before holding on for the win.
Milwaukee trailed 69-65 to start the fourth, before Crawford swished a three pointer that would ignite a 15-6 run and nearly make a Bucks comeback out of reach. Courtney Lee, who had returned to the lineup after nursing a left knee injury, made a three that made it 81-71, then was followed by another three by Crawford to put Boston up 84-71 with 7:51 left.
The Bucks put together a 13-4 run of their own and made it 90-87 on a pair of free throws by John Henson. After a Brandon Knight three pointer with 1:10 remaining, kept hope alive for the visitors as they were down 99-96, until Jared Sullinger beat the shot clocker with a jumper on the other end making it 101-96.
Stevens said that he put Sully in a bad situation on that play, but the forward pulled it off by beating the double team and making the shot his team needed to put the game away.

"It's a good player making a good play and bailing out a bad coach," Stevens said.

The Celtics are off until Friday, when the Denver Nuggets come to town. This will be Boston's first nationally televised game on ESPN, tip-off is at 7:30.

Game Notes:
Courtney Lee in his first game back from injury went 5-for-7 for 11 points in 16 minutes off the bench. Rookie Kelly Olynyk missed yet another game with a sprained right ankle, still has no turntable on his return. Before Tuesday night's game it was reported Rajon Rondo had been cleared to participate in full contact practice, it's up to him when we will make his return to an actual game.
Joel Pavón
Posted by Josue Pavon at 5:07 AM
Email ThisBlogThis!Share to TwitterShare to FacebookShare to Pinterest
Labels: avery bradley, boston celtics, BRad stevens, causeway street blog, courtney lee, jeff green, joel pavon, jordan crawford, milwaukee bucks, o.j. mayo