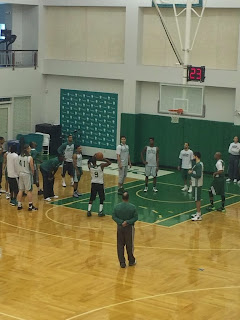 Boston - It was a week ago today when it was announced that Rajon Rondo was cleared by doctors to practice. It was a step in the right direction for the rehabbing guard who looks to return to the court at the turn of the calender and by the looks of things so far, there should be no delays. The media got an inside glimpse into the progress of the all-star yesterday during and after practice in Waltham.

Despite being the subject of trade rumors the last few days, Rondo is gearing to run with his Celtic teammates sooner rather than later. That was evident more than ever yesterday after Brad Stevens ended practice. Rajon was not done practicing. Rondo and several teammates decided to run an impromptu 5-on-5 scrimmage. Now to the ordinary sports fan, you might say so what? But to the true basketball heads, the ones that played until they couldn't breathe anymore, are smiling right now.

The kid inside all of us who played for hours without worries, or rules was alive and well at the Celtics practice facility Friday afternoon. Rondo ran with a good mix of teammates that included Keith Bogans, Kelly Olynyk, Gerald Wallace and Jared Sullinger. While the opposing team consisted of MarShon Brooks, Phil Pressy, Kris Humphries, Courtney Lee and assistant coach Walter McCarty.

During the scrimmage Rondo went down on a couple of occasions, absorbed fouls and even had a mid court collision with Pressey. He did a few crossovers to feel out his knee, and overall looked pretty good for someone who less than 12 months ago tore his ACL. Those that choose to speak to the media afterwards, liked what they have been seeing since Rondo's return especially on Friday. 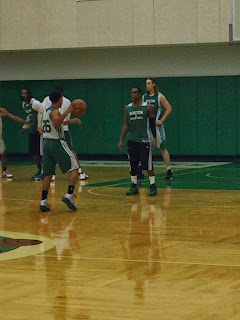 "He's an All-Star, he's a professional. Basketball is basketball," said Wallace. "No matter what injury you have, basketball is going to be the same when you come back...The main thing is for him getting back on the court, getting into rhythm and getting the confidence back in his legs."

Even Brad Stevens has seen how great the point guard has been from day one up until now;

"He's so smart, he can run plays in all three guard positions right now. He's really been positive for the last three months," said the Celtics coach. "You could throw him into any drill even before he was ready to play 5-on-5. His mind helps us in a lot of ways, even before he was physically ready."


Rondo of course declined any comment to the media, and rightfully so. He knows there would probably be more questions about rumors than anything else. As for a timetable on his return, if this keeps up, we should expect next month to be a target. In the meantime, there should be more scrimmages before an official return, and the rest of his teammates are happy and excited to assist him in the process.

According to reports Rondo looked 'aggressive' and 'dominate' during practice and the scrimmage. It's fair to say, he has passed the eye test for now.