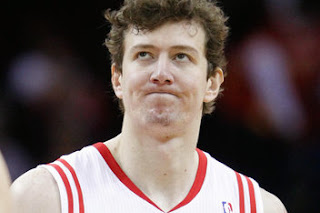 The Houston Rockets have decided to trade Asik and want him dealt as soon as this week. It's been reported all season long that Asik is unhappy in Houston. With Dwight Howard in town, the two centers have struggled to be productive while both on the floor.

Houston has reportedly expressed interest in forward Jeff Green. But according to Marc Stein, Celtics are hoping to deal Brandon Bass, who could interest the Rockets. The Celtics have nine first round picks and could be willing to send more than one to Houston in exchange for Asik.

Houston Chronicle's Jonathon Feign reported Sunday that Houston's general manager Daryl Morey "hopes to come away with either a strong defensive wing who can catch-and-shoot, a power forward who can fill in as a back up center, or expiring contracts that come with first-round picks - or some combination of those assets."

Asik is a seven-foot rebounder who can also protect the rim. He proved to be a double-double machine when he averaged 10 points and 12 rebounds a game last season for Houston.

An elite defender is a piece that the Celtics are going to need in this rebuilding phase and Asik fills that need. Celtics haven't had a defensive-minded center since they traded Kendrick Perkins, ultimately forcing power forward Kevin Garnett to play center.

Asik has a $14 million tag for next season. If Celtics complete a deal involving Bass, they will be in good shape to pay for Asik's services for the remaining season and through the 2014-15 campaign.
Posted by Josue Pavon at 5:05 AM
Email ThisBlogThis!Share to TwitterShare to FacebookShare to Pinterest
Labels: boston celtics, brandon bass, causeway street blog, daryl morey, espn, houston chronicle, houston rockets, jeff green, josue pavon, omer asik