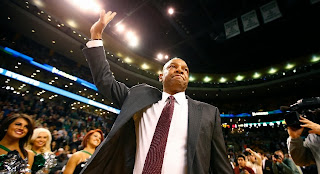 Boston - In his first return to the place he called home for nine years, Doc Rivers not only got a great reception from the Celtics faithful at TD Garden but also got a win, as his Clippers beat the home team 96-88.
Speculations were running wild through the city the last few days on how Rivers would be received after he chose to take his coaching talents across the country to LA-LA land, instead of sticking around through a rebuilding year.
All doubts were put to rest the moment former Celtics leader stepped out of the visitor's tunnel and onto the parquet to a roar of applause from fans on their feet. It only got louder during player introductions, and of course during the video tribute at the end of the first quarter on the jumbo-tron, that ended with "Thank You Doc!" You saw Rivers trying to wipe away tears as he acknowledged yet another standing ovation. The coach who had lead the Celtics to the 2008 NBA title, had returned to an much-appreciated welcome. 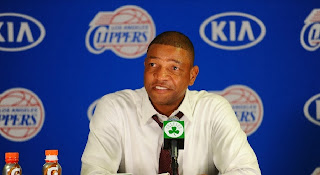 "It was just a really nice day," said Rivers chocking back tears during the post game conference. "This is, it's just a classy place here...They cheer for their teams and they love their athletes. The best decision I ever made was 10 years ago, when I decided to come."


LA hit clutch shots down the stretch. Jamal Crawford scored 21 points, hitting a pair of 3-pointers 23 seconds apart to help the visiting team pull away in the final three minutes. Chris Paul had 22 points, nine assists, seven rebounds and Blake Griffin scored 18 points for the Clippers who have won seven of its last 11 games. 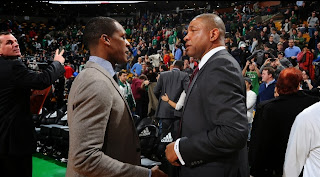 Jeff Green scored 29 points against his former coach while Jordan Crawford scored 20 points and had nine assists. Brandon Bass finished with a double-double putting up 17 and 12 for the Celtics, who lost its second game in a row and went 0-2 during 'reunion week'.
"It wasn't emotional," said Green, one of just a handful of Celtics remaining from last season's team. "We were just trying to win a game, plain and simple."
Regardless of how the players want to down play the emotion, it was Doc's day to wave and shake hands, and give out hugs to the familiar faces he had gotten to know over the years. He earned that right because of what he accomplished. Whether it's because he brought a title back after 22 years, or because he became the third most winning coach in franchise history. He contributed to making the Celtics relevant again, and how could any true Boston sports fan forget that? 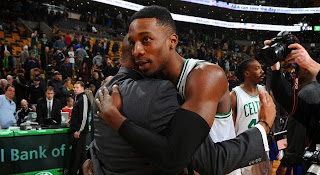 "I was basically useless for the first 18 minutes of the game. I thought." an emotional Rivers said after the game. "It was nice. It didn't surprise me. You've got to live here to understand that. It is an amazing fan base, it really is. And I just want everything to go well for them."


During the game Doc did what he does best best, coach. As he got 34 points from his bench to Boston's four. The Celtics led by as many as nine points in the first half, but the Clippers quickly erased it in a back and forth third quarter in which the lead changed hands five times. Los Angeles had a 85-83 lead with less than three minutes left in the game when Jamal Crawford made back-to-back 3-pointers. Boston did cut the lead to five on a Jordan Crawford 3-pointer but never got closer as Chris Paul took over the scoring duties to get LA the win.
'Reunion Week' continued for Doc last night when he faced former Celtics Paul Pierce and Kevin Garnett in Brooklyn. although the results were not in Rivers' favor this time around, must feel good to get those last two games out of the way.
The Celtics finish off their emotional roller coaster ride of a week by meeting the Knicks once again, this time at the TD Garden. Tip-off is Friday night at 7:30.

Game Notes:
Boston shot an awful 41% from the field, and turned the ball over 17 times that lead to 15 L.A. fast break points. While the Clippers stayed aggressive going to the line 34 times to the Celtics' 19. Kelly Olynyk missed last night's tilt, making it 10 consecutive games he has been out. He is questionable for Friday night's lineup. Kris Humphries was also a late scratch, as he was out with a bruised right knee suffered in Brooklyn on Tuesday night.