Boston - The Celtics came into Monday night's game fresh from a three day lay-off, stitting pretty atop of the Atlantic Divison at 11-14. Minnestota came into the TD Garden owning an 18-point win over the C's from a month ago. This time around Jared Sullinger played more than 14 minutes and contributed with more than just three points, as Boston evened the season series by beating the Timberwolves 101-97. 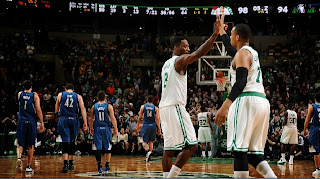 On a night when Jordan Crawford (6-of-14), Jeff Green (3-of-11) and even Brandon Bass (0-of-5) all struggled from the field, it was Sully who owned the fourth quarter after hitting a tiebreaking 3-pointer with 2:22 left as he had 15 points and six rebounds in the period alone. When it was all over, Sullinger led the Celtics in points (24), rebounds (11) and a career-high five assists. He also had the assignment of guarding Kevin Love (9-for26) for most of the night as well.

Avery Bradley, who has been shooting lights out as of late, scored 19 points for the Celtics, who have won for the fifth time in seven games to hold on to first place in the division despite a 12-14 record. Love had 27-points and 14-rebounds for Minnestota, a team that has not won in Boston since 2005. He also shot poorly from three-point range going 2-for-11.

"I shot the ball good; it just didn't go in, said Love. "It was that way for all of our team...We shot the ball pretty bad the whole game. We beat that team the majority of the time we play them." 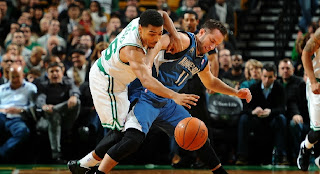 Kevin hit a 3-pointer to give Minnesota a 92-90 lead with 3:48 to play, then Jordan Crawford tied it from the right baseline. After both teams exchanged misses, Sullinger hit a dagger three ball from the top of the key to give Bosotn the lead for good.

"We made the right plays, and I happened to be the beneficiary," Jared said. "I was just wide open. I passed up a lot of shots in the third when I was wide open."

After the Sullinger three pointer, it seemed Minnestota's window was still open as Boston commited a few turnovers down the stretch including an eight second violation when Crawford failed to get over half court before time expired. The Celtics led 95-94 when Sullinger grabbed the rebound of J.J. Barea's miss and made free throws with 18 seconds left to make it a three point game. Then on a Nikola Pekovic missed dunked, Sullinger grabbed yet another rebound and made one of two free throws with 14 seconds left for the win. 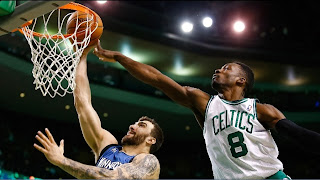 Brad Stevens spoke about how the second year forward needs to play like he did in Monday's win.

"Kevin [Love] is considered an elite NBA player, and Jared is a rising NBA player. You look up to those guys, you study them and you figure out what they do to make themselves elite," said the Celtics' coach. "If there's a person in basketball that you can identify with, those are good guys to learn from."

Celtics will host the Detroit Pistons Wednesday night, as they try to avenge another lost from last month on this current home stand. Tip-off is at 7:30 from TD Garden.


Game Notes: Boston only turned the ball over 13 times compared to their season average of 18. They were impressive on the boards even though they lost the battle of the glass as they were out rebounded 51-50. Kelly Olynyk in his second game back from a sprained right ankle scored nine points and grabbed 4 rebounds in 13 minutes, while Kris Humphries returned from a bruise right knee and contributed a solid eight points (4-of-5 from the field), and seven rebounds in 21 minutes. The Garden crowd recieved the former Northeastern star J.J. Barea well, as he had a double-double 10-points and 11-assists.