Brooklyn – The game was more over hyped by the media, emotions were not as high as expected. Paul Pierce and Kevin Garnett were playing in their new home against their former team. After the smoked cleared, the Celtics had its three game winning streak snapped at the hands of the Nets; 104-94. 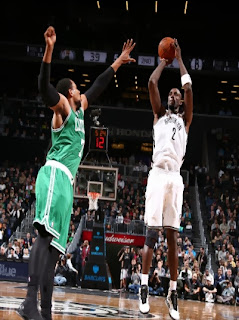 Boston was coming off an historic win on Sunday versus the Knicks. Paul Pierce hadn’t played a game in two weeks due to a broken hand, and Deron Williams had missed his last 9 games due to a sprained left ankle. Both returned and helped get their team a much needed home win as they beat the first place Celtics. Williams scored a season high 25 points in his return to the starting lineup, while Brook Lopez added 24.

“D-Will set the tone for how we were going to play tonight,” Garnett said.

KG finished with 11 points, just his third time in double figures this season, and grabbed nine rebounds. Pierce who came off the bench for the first time in six years after making a quick recovery, finished with four points, seven rebounds and three assists.

The Nets meanwhile, won consecutive games for the first time all season. Despite losing six straight at home, and their internal issues, this might be the turning point that this team desperately needs.

“We’re starting to get whole and it’s definitely good to have everyone back,” Williams said. “Even though Paul didn’t start, I thought he came in and gave us a big boost off the bench. It seemed like our energy level was a lot better. More intensity on both ends of the floor.” 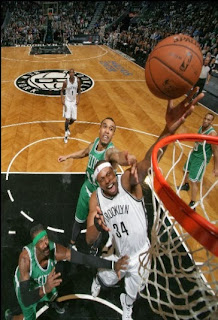 Avery Bradley scored 22 points and Jeff Green had 19 for the Celtics, all five starters scored in double figures. But not much production from off the bench, which scored only 12 points. It was a bittersweet ending to their few days in New York.

“The players that had come back tonight, I still feel like they were a very good team. But obviously having two of their leaders as in Deron Williams and Paul, you know that definitely helps them out a lot,” Bradley said.

Pierce was expected to miss two to four weeks, but sat out only four games before returning to practice on Monday. He received an ovation when he checked in with a protective glove covering his hand midway through the first quarter. There were many Boston fans all around the Barclays Center as they cheered for Paul and the Celtics throughout the game.

Kevin Garnett gave out hugs and pats on the heads of the Celtics’ starters before the opening tip. And a huge embrace with Rondo during a break, who has said in the past that Rajon is like a little brother to him. Boston trailed 31-20 after the opening quarter and by halftime they were down 56-47.

Celtics looked like they were poised to take over the third quarter as they quickly tied the Nets 60-60, before Brooklyn went on a 10-0 run and never gave up the lead the rest of the way. Even after being down by as much as 15 in the fourth Boston got within 5 with less than two minutes to play but couldn’t make it happen as they failed to get their fourth win in a row. 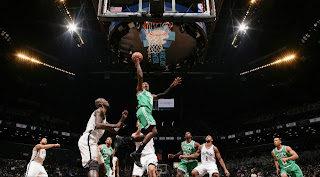 “They played great tonight. Played really hard, really together. They took us out of what we wanted to do,” Celtics coach Brad Stevens said about the lost.

There is nothing like a little incentive in playing your former team. The Nets and Celtics know what it means to play each other this season, not to mention the two teams are on opposite sides in the Atlantic Division at the moment. Nothing has changed after Tuesday night. Hopefully the next meeting in January will be even more interesting as it’s not only a nationally televised game, it will be at the TD Garden and more importantly both teams should be healthy.

Until then, ‘reunion week’ continues for the Celtics as they are set to take on Doc Rivers and the Clippers on Wednesday at home. Tip-off is at 7:30.


Game Notes: Boston only turned the ball over nine times to Brooklyn’s 13, but were out rebounded 42-35. The Celtics only shot 43-percent from the field while the Nets shot 56 for the game. Kelly Olynyk missed his ninth consecutive game and will be a game-time decision for tomorrow night against L.A. Joel Pavón
Posted by Josue Pavon at 1:15 PM
Email ThisBlogThis!Share to TwitterShare to FacebookShare to Pinterest
Labels: avery bradley, boston celtics, BRad stevens, brooklyn nets, causeway street blog, joel pavon, kevin garnett, paul pierce