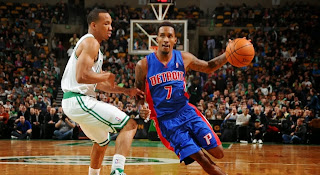 Boston -It felt like deja-vu Wednesday night when Jared Sullinger hit another huge three pointer in the fourth quarter to put the Celtics up one point, forcing the TD Garden to erupt into a frenzy. But a crucial made basket down the stretch by Brandon Jennings put a stop to the C's attempt to grab win number 13 on the season, losing to the Pistons 107-106.

Jennings scored 28 points (9-of-21 from the field) , and made a key three-pointer (five on the night) with 46.7 seconds left, he also matched his season high with 14 assists, while the rest of Detroit went 10-for-27 from beyond the arc. The confidence he has had this season comes from his coach when it comes down to taking the big shots.

"He tells me to go be great with five minutes to go in the game, so that's what I'm trying to do," says the young point guard referring to Mo Cheeks.

Andre Drummond scored 14 points and grabbed 16 rebounds as Josh Smith added 20 points for the Pistons who beat Boston for the second time in the last month, and improved to 6-1 in their last seven road games, including a win at Indiana Tuesday night. 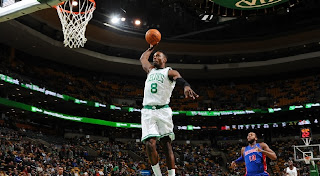 Celtics were up by as much as 21 points in the first half after scoring 42 points in the opening quarter, a season high for the home team. Seven players finished in double figures, while Jared Sullinger lead the way with 19 points. Jordan Crawford had 17, Avery Bradley 14 and Jeff Green 13 for Boston, who have lost for the third time in nine games.


"It's easy for all of us, myself included, to be really focused on we had a 19-point lead and didn't win the game,' but we got outplayed for 36 minutes," said coach Brad Stevens.

Jeff Green missed a driving one-handed layup as time expired, it was the play that coach Stevens designed for him to make at the buzzer.

"Not every shot falls," Jeff said "Josh made a good attempt, trying to block it. I redirected my shot and kind of missed it." 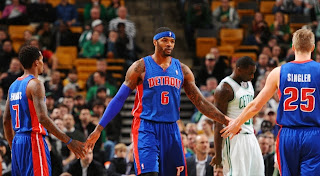 Boston finished the first quarter shooting almost 70-percent from the field (16 of 23), leading 42-23 and ended the first 12 minutes on a Gerald Wallace alley-oop to Sullinger at the buzzer. By halftime the Pistons had cut it down to 63-52 while the Celtics were shooting 61.5 percent in the first half. Once the third quarter started, Boston couldn't hit shots, making only seven of 24 attempts. Detroit was only down 81-80 after three quarters.

The Pistons held a seven point lead after Smith's three with 2:56 to play in the fourth before Boston scored the next eight points. Sullinger's three-pointer from the top of the key capped off the run and put his team up 105-104 with 1:01 remaining. Jennings responded with a three of his own over Bradley 14 seconds later. On the next Celtic possession, Sullinger was fouled and hit one of two free throws and Detroit was still up 106-107 with 41.5 seconds left. After tough defense from Bradley, Jennings missed a long jumper that was followed by a failed put back by Drummond. Sullinger grabbed the rebound, setting up a final shot for Boston with just over 18 seconds remaining.

A failed play by Bass forced Stevens to use one more timeout to draw up another play, this time for Jeff Green with only  five seconds on the game clock. But Boston was no so lucky this time around, as Detroit celebrated another win vs. the Celtics.

"I thought our second half was obviously better than our first half," the first year Pistons coach said. "The first quarter, number one, our energy level was low. We picked our energy up and got back in the game."

The Celtics continue its home stand at TD Garden when they on the Wizards early Saturday afternoon, at 1:00 pm.


Game Notes: These two teams were pretty evenly matched in rebounds: Bos-41/Det-36, assists: Bos-22/Det-22, turnovers Bos-18/Det-16 and even fastbreak points Bos-22/Det-22. While Boston's bench outscored Detroit's 32-24. Trade rumors have been swirling around the Celtics the last few days, Courtney Lee, Brandon Bass and Rajon Rondo have been mentioned in trade talks... Gerald Wallace arrived to the locker room about 90 minutes before tip-off after stating his usual 10-mile commute took an hour and a half to drive to the arena.