Rivers admits he walked out on Celtics team 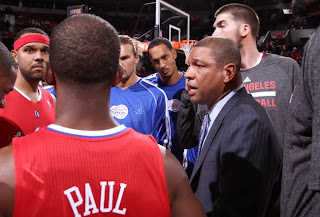 Los Angeles coach Doc Rivers admitted he walked out on his Celtics team this past summer when he agreed to coach the Clippers.

Rivers, who spent nine years coaching the Celtics, winning one title in 2008, returns to TD Garden for the first time as a coach of the Los Angeles Clippers. He spoke to 98.5 The Sports Hub about his decision to leave and had this to say when he was asked if he walked away from Boston:


“I did at the end of the day,” he said on 98.5 The Sports Hub. “You make choices in your life, it happens. It was a very difficult decision for me to make – whether to walk away and sit a couple of years, which was another way I was leaning, or if the right job presented itself to walk away and do that. I was afforded a great opportunity here with the Clippers. This is the first time I’ve been able to coach a team and run a team. This may work, it may not work. It’s a far bigger gamble for me than anyone else. So I thought it was the right time to take it.”

It's clear that Doc wanted to take on a bigger challenge. In Los Angeles he's able to be a coach and a part-time 'Danny Ainge,' a role he's never had before.

There was lots of speculation that Rivers didn't want to be part of a rebuilding Celtics team. Ainge sent Paul Pierce and Kevin Garnett to Brooklyn a week after Rivers signed with Los Angeles so that may have also factored into his decision.

Rivers also said that he expects to hear some booing tonight in Boston.


“Well I’m sure there will be some, because they were booing when I coached,” the Los Angeles Clippers coach told news reporters this morning.