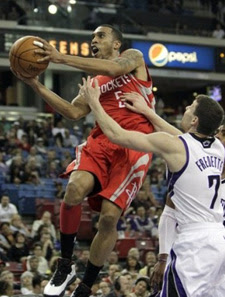 Sources say Portland became the third team to step up in the 11th hour and help the Celtics acquire highly sought after shooting guard Courtney Lee in a three way trade with Houston. After potential deals fell apart with New Orleans and Phoenix, Sasha Pavlovic will become a Blazer while JaJuan Johnson, E’Twaun Moore, Sean Williams and a 2013 second-round draft pick will all head to Houston. Johnson, Moore and Williams will earn a combined $2.7 Million next season and Pavlovic was signed to be included in the deal to increase Lee’s salary. According to the Boston Herald, Lee could earn just over $6 Million and make upwards of $26 Million over the life of the deal that is still being worked out but looks like will probably be in the ball park of four years. This was the type of trade Boston was looking for a week ago with Dallas, but they were not interested in anything the Celtics had to offer. Ironically enough the Mavs signed two-guard O.J. Mayo to a two year deal, another free agent on Danny’s wish list (Now we know why no trade was made). The contracts of Williams and Moore are non-guaranteed, so more than likely the Rockets will waive the newly acquired players to make room for other potential signings. While reports say Johnson has already requested to be traded, details are still developing on all parts of the deal. With the Celtics adding Lee (11.4 PPG, 3 RPG, 40% 3PT) into the mix without disrupting the core of the rotation, this offseason is turning out much better than what most people thought.


I think it’s fair to say until we knew exactly when Avery is coming back, the Celtics have found their starting two-guard while keeping Jason Terry in his primary role as the sixth-man. So far with the new additions this summer, that makes Pierce, KG and the JET as the only players over the age of 30 on the roster. Now who saying this team is “OLD”? It appears Ainge might be looking into one if not two more small signings before the start of training camp. Mickeal Pietrus and Keyon Dooling are still available and are very much open to returning to Boston, we will keep you posted on any new developments.

By Joel Pavón
Posted by SeanDutra at 2:59 PM