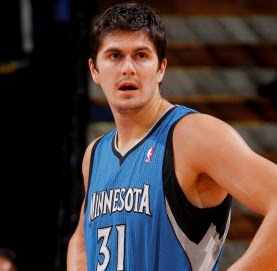 The Celtics are reportedly interested in one of the biggest draft busts in NBA history; Darko Milicic.

The Wolves amnestied Milicic earlier this week, making him an unrestricted free agent. Boston is one of three teams interested in signing him. Brooklyn and the LA Clippers are the other two teams, however there have been recent reports saying that the Celtics are frontrunners in the Darko sweepstakes.

Although Darko hasn't performed well at all throughout his career, there is still an upside in signing him. He's actually a center. At the moment the Celtics have no true centers under contract. Although bringing back Jeff Green, Chris Wilcox and Brandon Bass was big for the club we could still use a little more depth at the center position to relieve KG. In a league filled with not a lot of seven footers the Celtics could be picking Darko by default.

But here's a pro to battle the oh so many cons- We all know it's not going to be his offense that will help us, it will be his defense. Boston will look to grab as many big men as they can get for next season. As we saw last year with the Hollins signing (and with Mikki Moore a couple years ago), Doc likes to have a seven footer around. He actually had two this past season (Hollins & Stiemsma) and shit with a point guard like Rajon Rondo running the show, who can blame him?

Also with Stiemsma reportedly heading to Minnesota, we can't blame Danny for wanting to beef up the front line. Adding a seven-footer doesn't sound like such a bad idea, even if his name is Darko.