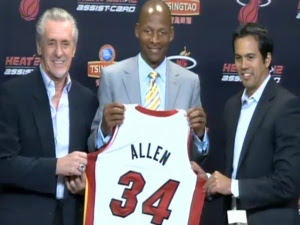 “They really wanted me to come back… We won a lot together in five years. … They were disappointed. Like I said, it’s a sad thing for me and my family because those are the relationships that we won’t have on a daily basis in our lives. But they’re still friends of mine forever.” -Allen

Cue the Green Day classic song here…but wait not so fast, lets actually remember exactly what has transpired here in Boston over the past week.


Ray Allen also known as Mr. 3-point King agreed to join the arch enemy Heat down in South Beach. Fast forward to Wednesday, he is now officially a member of the 2012 NBA champions. One would think, 'oh good for him, let him go after that second ring one more time.' Except he left one contender who was one game away from a third trip to the NBA finals in five years, to another that has knocked him out of the playoffs the last two seasons.

If you ask me that sounds kind of weird- Ron Artest like even. That’s not the worst part, he took less money (9 mil over three years vs. 12 mil over two) and more than likely will have less of a role than the one in Boston.

That’s all fine and dandy if he was old and slow and couldn’t really move anymore (i.e. Sam Perkins) or more recently Mike Miller, who can barely stand, but can still jack up threes. That’s not the case here folks. But I'll give it to this man, he has aged like a fine wine, which makes the move all that more confusing to me. Now No. 34 (I refuse to use his name by the way), seems like he’s in better shape than most young players, and that’s saying a lot in today’s game. He is one of if not the best shooter I have had the privilege of witnessing in the past 20 plus years. 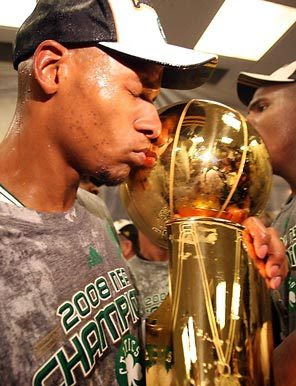 If anything, playing in Doc’s “traditional” system only helped prolong his career and kept him in the gym and on his toes to be better than ever.

So, the end result?

According to him, playing in Miami’s system will be like playing in Seattle again, which he thinks better suits him.

New flash buddy, you were the number one opinion there 10 years ago! You might be option four in Miami. So I think it’s safe to say it will not be the same as it was in Seattle, like he stated.

I think we can agree the Heat play a west coast style game where they very few if any plays really called; it’s more a freestyle, go with the flow transition type ball. Play D and try to force turnovers to score as quickly as possible. That’s how they killed OCK in the Finals, by not really having set plays and a structured-traditional offense.

Bron-Bron usually invents something else on the fly or “improvise” simply put, if it gets you two points, no one will say anything.

Does this quote sound familiar?

“The play was supposed to be for X…but LeBron improvised a bit," says Erick Spolstra after every game.

So Allen, who are you going to blame when you don’t get your touches especially in crunch time, when no play will be executed for you? Yeah good luck with the “position-less” style or lack there of system.

All that hard work you put in the last five years goes away with the snap of two fingers. Just like that, while you are standing in the corner hoping to get that ball, I hope what’s rushing through your mind will be “Damn, I don’t think I’m getting this pass, or LeBron even see me.”

There is no point to set picks for you because let's face it, no point guard to control who’s getting the ball in key moments of the game, plus this team is awful in a half court set. Guess what team best defends this great “system” Miami has? You guessed it, the team you just left high and dry!

Of course you will hear with the arrival of Jason Terry probably made it that much easier to bolt. But if any coach could make Jason Terry and No. 20 co-exists off the bench and get the most production, it would have been Doc. He wouldn’t have to spell Rondo; Terry would have played the point more.

Doc prided himself on running plays especially for you (No. 20), and they always worked! Terry is more bench scoring and added fire power, he’s another champion!  Avery Bradley will not be ready until January at the earliest, guess who would have started? It’s obvious there was no trust for his former coach. What about Kevin Garnett? Forget the fans for a moment, how could you have done this to KG, who was committed to keeping this thing going for as much as possible to get that 18thchampionship, and you turn your back on him?

There is no such thing as loyalty in sports then, if this guy could do something like that. This was bigger than ball, this was family this was a way of life in Boston.

You claim Danny didn’t make you a priority and now you and Rondo didn’t get along? I quit!

For the rest of the offseason I got to hear whose fault was it for losing No. 20 to the Heat. You screwed the team not just the fans with your decision!

Celtics were no longer able to go for another top notch shooter because they have all committed to other teams already.

I would love to hear what momma Ray had to say. I guess your son’s doctors haven’t been doing a good job these past four years, if you have chosen to not use them anymore. But no worries, it’s not like Miami doctors are not busy at all with the bath salts epidemic where people are eating other human faces. 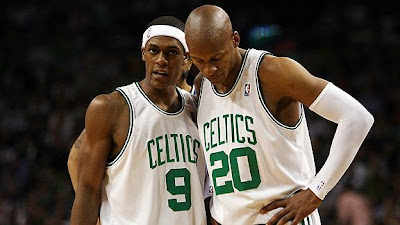 You let Pat Riley sweet talked you like a girl; I’m done with this guy!

No more Jesus, 'He Got Game' can’t be viewed the same way and it hurts that I will never cheer for this man again.

Call me a hater or disgruntled fan, but I love the game of basketball first then the Celtics. Coming back here would have been good for the league period.

The goal was to win multiple titles, you think Bill Russell doesn’t echo in KG’s head when he told him he thought he would win at least two or three rings in Boston?

You failed and instead of coming back to beat those guys on the road to another chip, you picked the easy way in joining a team that misrepresents what basketball should be about. You might as well have joined the Lakers, back in 2010. But why didn’t you? Because you wanted back what was rightfully yours and you wanted another crack at LA, right?

So what made you not want to do the same this time around, when you knew the C’s would be better? This team was the measuring stick that even Miami admits they know they have to throw the kitchen sink at before it's all said and done.

With your generation of players which there are very few left, who play the game the right way, and have a winner's mentally, (Kobe, Nash, KG, Pierce, Duncan etc.) dedication and heart that barely exists in today’s generation (oddly enough my generation, the 80s babies) and you won't be remembered as a Celtic but instead the man who went to a “living in the moment franchise” when Boston needed you most, and they offered you the most. You had success here, you broke records, you were on a contending team for five years and you won here!

I’m hoping the two most recent Eastern Conference champions will meet again in the 2013 Conference Finals, it’s only fitting.

Ray, you had a chance to go out on top and finish the job as a Celtic, and you choose to walk away to the enemy no less.

The C's might be hurting now, but it will be that much sweeter when banner 18 is raised and you will not have anything to do with it.

Yeah, you helped bring the C’s back into relevance for a new generation but I would have never thought you would have done anything to mess that up, until the night of July 6, 2012.

Guess whose number doesn’t get to hang in the TD Garden rafters? It’s all just water under the bridge and now fans can turn the page on the “Big 3."

For what it’s worth, Oh I never forget despite it being something unpredictable…“I hope you had the time of your life…”

See you next year at the Gaaahdan, I’ll be the one booing along with a few thousand C's fans…It is what it is because the way I see it... This is CAUSEWAY STREET…NOT south beach!

I’m over it already, bring it!