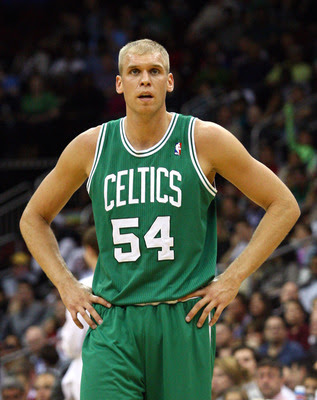 According to reports the Minnesota Wolves are expected to sign center, Greg Stiemsma.

Stiemsma is a restricted free agent, meaning Boston has the right to match any offer for the center. However, Minnesota's offer might be out of range for the Celtics. Boston's qualifying offer was reported to be a little more than $1 million while Minnesota's offer will reportedly be $3 million for one season.

For a guy who was fighting his hardest to stay in the league, it's great to see Stiemsma earn a solid contract in the NBA even if it isn't with Boston. Going from D-League Defensive Player of the year to being compared to Bill Russell by commentator Tommy Heinsohn is an impressive leap. Stiemsma's shot blocking ability is something that will definitely keep him in the NBA. In a league where a championship team such as the Heat can win a title with no true center on their roster, it's no question why his stock rose.

There have also been reports that Minnesota is also looking into guard Courtney Lee. If they're able to pull it off, that would be two free agents that Minnesota grabbed from our reach this summer. Good thing they at least they had the common courtesy to let go of Darko for us to make a run at him.

Highlights from Stiemsma's 6 block debut game against the Hornets: