Celtics Bench to Get a Lift from the JET 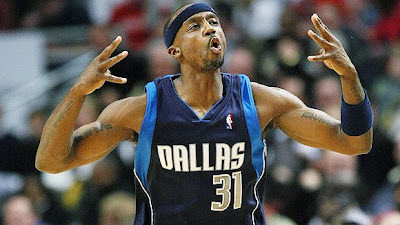 In order for the Celtics take that next step to be a legitimate championship contender they needed to improve a few things from last years squad. The most glaring issue the Celtics had last year was the absence of a significant contribution from the bench. They desperately needed to solidify their bench production, which was abysmal last season throughout the entire post season.

In a perfect world, the Celtics would have been able to keep the Big Three intact and bring Ray Allen back to come off the bench. The big issue was with the emergence of Avery Bradley; there was no way that Allen would be a starter for the Green Team. For reasons unknown, the beloved #20 decided to do his best Jonny Damon/ Adam Vinateiri impression and took his talents to South Beach to join the hated Miami Heat.

So once Danny Ainge realized that they were losing their best chance of instant offense, he went and signed someone who has made a career on being that vital spark off the bench. Jason Terry signed with the Celtics and will be introduced Saturday at a press conference along with the other Celtics offseason additions.

In the Game 7 loss to the Miami Heat in last years Eastern Conference Finals, the Celtics injury depleted bench only mustered up an embarrassing TWO points off the bench.  Terry has been a defibulator his entire career, able to revitalize a team with his deadly three point shooting and energetic style of play. Terry has averaged 17.3 ppg over his 13-year career.  He has been coming off the bench for Dallas since 2008 and has still found a way to average over 15 ppg while only starting 67 games over the last five seasons.

His impact on the team this year will be huge not only with his scoring touch but with his health and durability. For an aging star, he’s only missed 11 games over the past five years as well. Terry is also able to spell both guard positions, which will be huge as Avery Bradley is coming off of shoulder surgery.

With the addition of Terry and resigning most of their players that were hitting the market, the Celtics rotation is now rounding into form.

The starting rotation will be solid with Rondo and Bradley in the backcourt, which has the possibility to be the most exciting backcourt in the Eastern Conference. Pierce, Bass, and Garnett will fill out the frontcourt with the hope KG can hold down that center spot again, this time for a full 82 game season.

The bench will be vastly improved with the addition of Terry and the potentially game changing ability of Jeff Green to spell the 3/4 positions. Neither Ainge nor Doc can know what they are going to get from any of the unproven rookies and second year players but the depth is there. The Celtics will need to make a few more moves to finish up the roster but no one can argue against the moves they have made this far to return as a legitimate contender in a wide open Eastern Conference.

Posted by SeanDutra at 6:56 PM