Report: LeBron James '100 percent leaving' the Cavaliers after this season 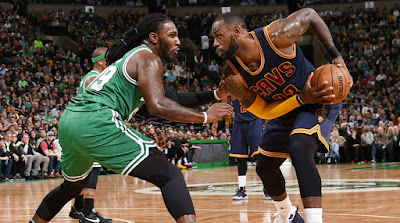 Just when you thought it couldn't get any worse for the Cleveland Cavaliers with the firing of GM David Griffin and a trade demand from All-Star point guard Kyrie Irving, it now seems like the inevitable departure of LeBron James, for the second time, will come sooner rather than later.

Basketball insider Chris Sheridan, tweeted a quote from an NBA source that suggested James will move on from the Cavaliers after the 2017-18 season.

NBA source said today: "This will be LeBron's final season in Cleveland. He is 100 percent leaving. Relationship with owners beyond repair."
— Chris Sheridan (@sheridanhoops) August 16, 2017

Will James head out west to save the Lakers or Clippers? It's anyone's guess, since the former MVP has a player option for the 2018-19 season and could become a free agent next summer.

James left Cleveland after the 2009-10 season to join the Miami Heat, and returned to the Cavs with two rings and a promise that he would deliver a championship to his hometown in the summer of 2014.

With Irving as his sidekick, James' promise came to fruition in 2016, only to have Irving, arguably his best teammate, ask for a trade out of Cleveland a year later.

The Cavaliers now face a dilemma to either trade Irving or wait it out to see if James actually walks, since he has a 'no trade clause' and can't be moved before next July.

While many teams have made offers to the Cavaliers for Irving, the Celtics have only called to inquire about the guard over the last few weeks.

According to ESPN's Adrian Wojanarowski, the Celtics have remained very much interested in Irving, but have yet to make an offer.


"Boston has expressed interest in Irving and could offer the best combination of short-term (Isaiah Thomas and Jae Crowder) and long-term (Jaylen Brown, Tatum, picks) assets. The Celtics have made no formal offer, and it is against Boston's front-office DNA to push out front with the most generous offer. Boston knows that Cleveland is mostly intrigued with Tatum, but the sides have not formally discussed that deal, league sources said." [ESPN]

The report goes on to state; that with the rumor, now seemingly to become a reality by the day, that the 2017-18 season will be James' last in Cleveland, it makes it more difficult to consider moving Irving at any point this season.

For now, it looks like the Cavaliers could eventually lose both Irving and James. The question is who's likely to be gone first, while the window of being a championship contender is quickly closing?