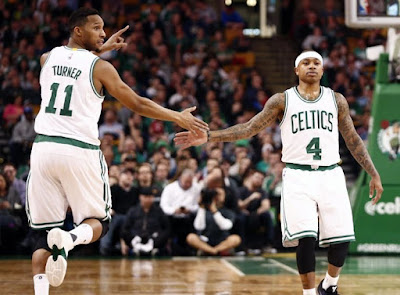 Isaiah Thomas left a great impression on Boston sports fans in his two-plus years in the city, but apparently in the Celtics locker room it might not have always been in a positive manner.

According to FOX Sports basketball analyst Chris Broussard, anonymous sources have said that many teammates disliked the All-Star point guard. Broussard wouldn't go into specifics on which players had issues with Thomas, but he speculates that the issues may have stemmed from the 28-year-old's narcissistic attitude.


“I spoke with several executives, or texted with several executives, last night,” he said. “And a lot of them were saying that a lot of the players in Boston really weren’t that fond of Isaiah. We know we had those problems in Sacramento and in Phoenix. I didn’t know he was having those issues, according to these executives, in Boston. He is known as a head strong guy. He’s got a huge ego. They say he’s got a Napoleon complex. You know, he always has that chip on that shoulder.” [FOX Sports]

"Cleveland is winning the East, and they're better equipped to play Golden State than they were before." — @Chris_Broussard pic.twitter.com/EuqeLZMj0B
— UNDISPUTED (@undisputed) August 23, 2017


Ex-Celtics teammates spoke out against the report about Thomas, who was traded to the Cavaliers on Tuesday night (along with Jae Crowder and Ante Zizic) for Kyrie Irving.


Evan Turner (now with the Trail Blazers) played a season and a half alongside Thomas in Boston, had nothing but great things to say about him during a candid interview with Sports Nation on Wednesday.


“I just don’t see how that even comes out,” the forward said. “I’ve never known him to be an [expletive] or disliked by anyone. He’s not arrogant or anything. Dude works his ass off.”


Whether there is any truth behind the story, it's just example of another Boston sports figure getting mud thrown on their name while on the way out the door and who better than to share such a story, with vague details than Chris Broussard?


Because I said some execs on other teams said he rubbed some Cs the wrong way, I'm an IT hater? Was just sharing what I was told post-trade
— Chris Broussard (@Chris_Broussard) August 24, 2017