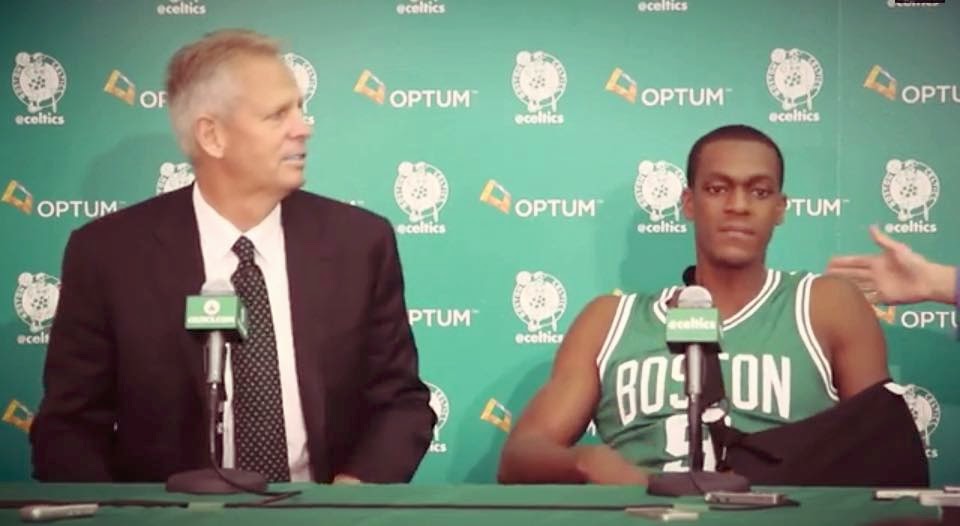 On what seemed liked a rather loose and relaxed three-hours in Waltham, MA, Brad Stevens had survived his second straight Celtics Media Day. A new NBA season was underway on Monday, and despite most of the focus being on a certain broken left hand, there seems to be a lot to look forward to. After hundreds of questions being asked by radio, TV and all other outlets, C's fans can't help but be intrigued about this team's possibilities after only 25 wins last year.


Here's a look at some highlights from yesterday:

Celtics captain: Rajon Rondo fielded questions on his latest injury, squashing all speculations that he broke the bone in the back of his left hand (metacarpal fracture), when he was seen at a trampoline park last week while celebrating his daughter's birthday. He simply stated "I didn't jump that day." As he continued during his press conference with Danny Ainge by his side, he explained in full detail how he fell in the shower last Thursday night, resulting in immediate surgery the next morning.

"Certain falls happen and you slip, and I slipped and tried to catch my hand," said Rondo. "It wasn't like a banana [peel] slip. I actually caught myself. I landed on my knuckle on my windowsill in my home. That's what happened."

Rondo knew the injury was serious almost immediately after the fall occurred.

"I was telling myself that it wasn't what I thought it was," Rondo said. "I tried to grab some things that night. I waited 30 minutes to make the call to [team trainer] Ed [Lacerte]."

The all-star is expected to miss between 8-10 weeks and at least the first 10 games of the regular season. But Rondo who had been sidelined for most of the last two years due to surgery that repaired a torn ACL in January of 2013, is in a good place mentally despite this latest setback

"The frustration was that day [of the injury], but the last couple of days I've been fine," said the Celtics captain. "I've been pretty positive. I think for what I went through with my ACL, this is nothing. I'm still looking forward to the season. I have high hopes."

Ainge has remained supportive and continues to stand behind his point guard, he says he has no reason to not believe Rondo or think he is trying to pull a fast one on the team.

"We're not investigators," said Ainge. "Talking to our medical staff, it's an injury that does happen when you land. "It's not like hitting a wall injury or something like that. It's an injury that usually happens in the third metacarpal. I wasn't certain it was exactly what happened, but I went to visit with Rondo at his home the other day. I had no reason to not believe Rajon."

The Celtics president of basketball operations also went as far as sharing a similar story about how he slipped in the shower as well just a few months ago.

"What makes this story even more unique was, this summer, I was in Vegas and I was staying at the Wynn Hotel. I came out of the shower and slipped and smashed my head," Ainge explained. "I had to go to the emergency room and get my head glued. I spent the night in the emergency room. I guess it's not that shocking to me that that's possible."

Rondo went on to reassure the media of his desire to remain a Celtic long-term, while stating how great the Beantown fans have been to him over his entire career.

"The love you get is kind of overwhelming in Boston, said Rondo. "Why wouldn't I want to stay here?" 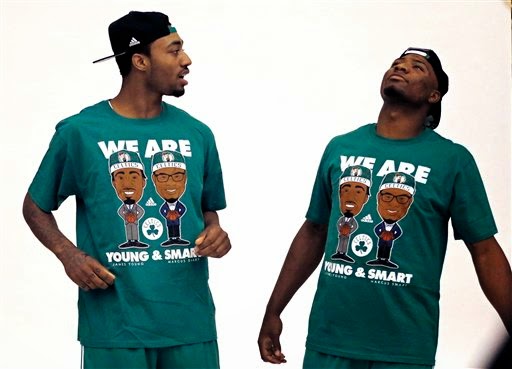 Who will start at point guard?: Coach Stevens and Ainge had the task of answering questions who would be Rondo's temporary replacement on the court. A few options were brought up that could seize the chance of becoming the team's starting point guard.

When asked about a rookie in particular of running the offense, Stevens believes if Smart wins the job, he would have no problem starting him.

"Marcus is going to get plenty of opportunities on and off the ball, said Stevens. "I think that he's physically, mentally and emotionally ready for those. He doesn't have experience yet, but that will come quick. At the same time, we have other guys and it'll be great for him to compete for that."

Clearly auditions have begun today for the team's starting point guard while Rondo will be M.I.A for the next month-in-a-half. Smart knows everyone is fighting for a spot despite the Celtics current situation.

"I think anybody embraces the opportunity to play more, regardless if Rondo was here or he wasn't," said Smart. "Just as if he was I still have to earn my stripes. Regardless if he's here or not, I'm still going to work hard and earn the respect of these guys." 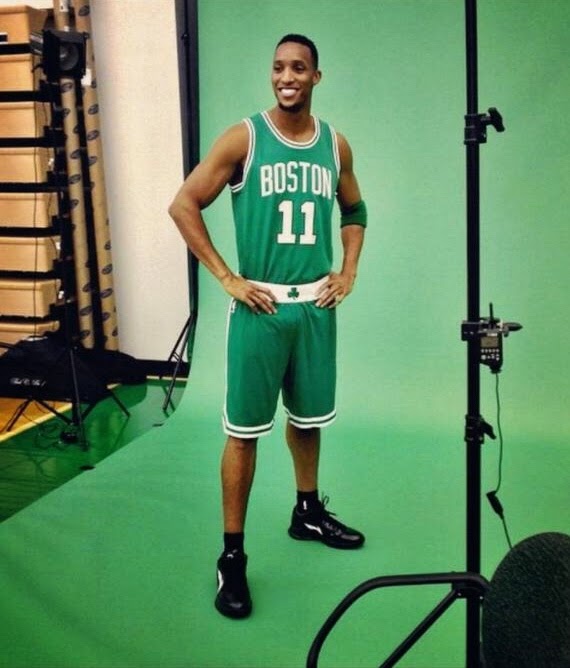 Turner becomes a Celtic: It only took about nine weeks, but swingman Evan Turner has made it onto the Celtics roster. The team made it's official announcement just hours before the start of media day. It's been reported by ESPN's Marc Stein that the the two-year deal is worth about $6.7 million. Turner will make about $3.28 million for the 2014-15 season. When asked about how he felt on finally being a member of the Celtics, he had this to say;

"I think it's a good opportunity and I'm looking forward to it." Turner explained. "I'm familiar with the Celtics organization...It's going to be fun, I think it's going to be a good year, and learning from coach Stevens will be even cooler."

Look for Turner to play multiple positions as his versatility offensively is a huge advantage.

D.U.I. When second-year big man Vitor Faverni was asked about reports of a drunk driving charge in Spain this past summer, the Brazilian cleared up what he called an 'embellishment' on the part of the Spanish press.

"There's no truth," Faverani responded. "[A writer] in Spain tried to kill me, but he [couldn't]. So there's nothing of it. I'm here, you know? Everybody in Spain knows [it's not true], so I don't care about that."

Faverani also denies there was any alcohol involved back on that night in July. While Ainge has spoken to the center's reps in Spain. For now it looks like there won't be any disciplinary action taken.

Leon Powe back in Boston: The 30-year old former Celtics center, who contributed to raising banner number 17 in 2008, is back with the organization. Powe has been hired by C's personnel and will have a role in player development. If you remember back in April of this year when Powe was apart of the 'Patriots Day' ceremony at Fenway Park, where survivors of the Boston Marathon bombings were honored. It was then when the big-man become interested in joining the Celtics staff. Congrats to Leon!

Looking back on the many interviews and the overall vibe of yesterday's media day, it made me feel optimistic and excited. Not like the scene a year ago, where everyone was still morning the lost of a two icons. This year's team on paper looks deeper, and could surprise their critics. It's all in how Brad Stevens decides to fit the pieces together, and I'm sure he's more than ecstatic about the chance to prove the nay-sayers wrong. After all can it really get any worse than last season?

For my sanity's sake, I hope not.