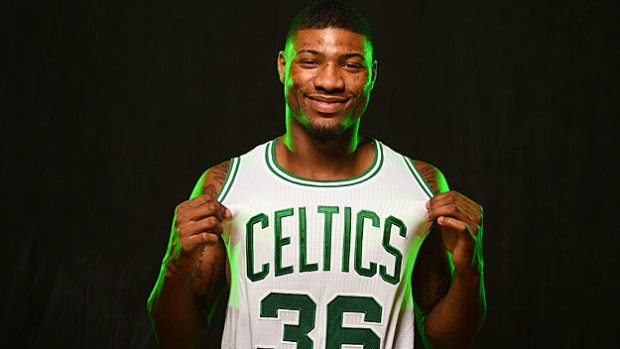 If you haven't heard by now; Rajon Rondo will be out 6-8 weeks due to a broken left hand. This means he will miss all of training camp and at least the first few weeks of the regular season. But not to worry, the Celtics have a few options at point guard which include this year's sixth overall draft pick Marcus Smart. An opportunity has presented itself for the rookie to showcase his talents beyond the recent pickup games at the team's practice facility in Waltham, MA.

In the past few weeks before Rondo's injury, Smart had been matching up against the veteran in a series of practice runs in preparation for camp. He talked about his experience in working with the C's captain one-on-one.

"I've been guarding him and he's been guarding me," Smart explained. "It's totally different from what I expected it to be. I've been saying he's one of the premier guards and he shows it, and his play shows why he is. Some of the things he does on the court, it's like 'How does he do that?' So just being able to be around him and learn from him is an amazing feeling." [Boston.com]

Look for Smart and Phil Pressey to compete for the majority of the ball handling duties. But my gut tells me the rook will surely impress his coaches in the next few weeks leading up to pre-season.

Speaking of training camp, the Celtics have made some changes to their roster this week. After trading away Keith Bogans to the Cleveland Cavaliers for Dwight Powell, Erick Murphy, John Lucas III and Malcolm Thomas. The C's decided to part ways with Chris Babb and fan favorite Chris Johnson by waving their contracts. But no worries, Johnson will find a home with a team sooner rather than later, according to sources. He deserves to be on an NBA roster, as hard as he has worked in the last year.

It was also reported camp invitee Christian Watford; was released yesterday afternoon to make room for the new additions acquired from the Cavs on Thursday. According to RealGM.com, the Celtics will bring the forward back on a training camp contract Monday, once he clears waivers. Danny Ainge will still need to open up two more spots, he could possibly cut John Lucas and Malcolm Thomas, who have non-guaranteed contracts. That would clear space for Watford and Evan Turner, who officially could be signed by Monday.

The Celtics currently have 20 players signed, the maximum allowed by the NBA

Veteran forward Gerald Wallace should be ready for on-court action next week. After a torn meniscus and bone spurs ended the 32-year old's season prematurely last year. Two surgeries were required to repair both ailments, and he has been recuperating for the last six months. Ainge is hopeful that Wallace will be ready to go starting Monday.

"I don't know completely on Gerald," said Ainge. "I think he'll be ready to go by training camp, but I haven't seen Gerald yet. He's an old, cagey vet. We'll probably see him on media when you guys do." [Boston.com]

Vitor Faverani has also been recovering from a torn meniscus that cut his rookie year short. The center has been seen a lot slimmer these days, but he also ran into some trouble with the law. The second-year big man was arrested in Spain for driving under the influence earlier this summer. Ainge gave an update on his health.

As far as Faverani seeing any disciplinary acton for his behavior two months ago, Ainge was vague when it came to specifics.

"We're still contemplating that [punishment]," said the Celtics president of basketball operations. "There will be some consequences, absolutely, but I wont make those public." [Boston.com]

Causeway Street Podcast - Celtics vs LA Lakers over the past decade