Brad Stevens: '[Rondo] a big part of what we're doing' 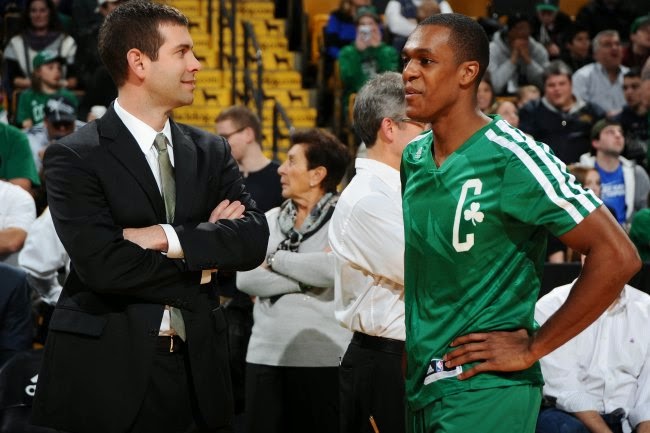 Despite rumors about Rajon Rondo wanting out of Boston, the Celtics organization has been adamant about including their starting point guard in their future plans.

Brad Stevens recently had a conversation with the Berkshire Eagle, and said that he envisions Rondo being a key piece for the Celtics rebuild.

"I love him. I really think he's a big part of what we're doing," Stevens said. "Hopefully, he can have a great year right from the get-go. I thought last year was tough from the standpoint that he never didn't have a chance to do any drill work or to rebuild habits. He just had to be thrown into the fire." [Berkshire Eagle]

Stevens went on to say that Rondo has had a very busy off-season and has been constantly working out throughout the summer.


"He's been great. He's been very active," Stevens said. "He's been in and around Boston most of the summer. He just got back from a trip to China. He was back mid-last week. He's been in the weight room and been around every day." [Berkshire Eagle]

Celtics president Rich Gotham also made a statement about wanting to keep Rondo in Boston next season. At a team volunteer event in Jamica Plain, Gotham made the team's first public comments regarding Rondo since the off-the-record comments made by Jackie MacMullan on ESPN's Around The Horn about Rondo wanting out of Boston.


"When we talk about Rondo [as a franchise], we talk about his development and recovery from his ACL," Gotham said. "So we talk about getting him ready to perform this season and we're excited about having the 'old Rondo' back. That's what we talk about. The stuff that gets reported in the media, it's out of our control. Sometimes you laugh a little bit, sometimes you shake your head a little bit, sometimes you say 'Geez, I haven't heard that, I wonder if there's anything there?' But we can't allow ourselves to pay too much attention to that. What's important to us is getting the team ready, and paying attention to media rumors doesn't help us get the team ready" [CBS Boston]

It would be foolish for the Celtics to trade Rondo right now. Rondo is entering his first training camp in two years, meaning his value won't be at its highest. There is the possibility of Rondo being traded at next season's trading deadline but there is no telling what Rondo or the Celtics roster will look like then.

Hard to imagine Rondo re-signing during the season. Expect Rondo to keep his options open, he'll be waiting to see what the Celtics roster will look like. If he does sign a new deal it will be next summer when Danny Ainge will take another swing at signing a big time free agent or trading for an all-star to place alongside Rondo.

No matter how you slice it, it's way too early to say what Rondo's future will look like. But don't expect the Rondo trade rumors to stop anytime soon.